NF Photography alternates an Abstract Art prompt with a Digital Art prompt.
Click on the link in the line above to see others or post your own.

11/3/14 addendum:  I chose this image to link to Photo-Heart Connection, as my choice for the image that I worked on (or posted) during October that is closest to my heart. 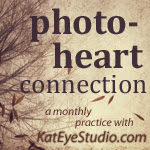 I come from stoic German stock ---I'm not demonstrative with emotions.  But somehow, the minute I stepped off the plane in Aracajú and was met by about 30 of my friends and former students, hugs and kisses were not only what I expected, but what I wanted.  Brazilians are so warm and welcoming, even to strangers, but in 2011, I was treated like a long-lost relative.

It was great to see that nearly all of my former students who lived in a small town in the middle of nowhere and had few prospects for employment, worked hard to pay tuition and room/board to attend a colégio in another city and eventually most went on to university. They became lawyers, doctors, nurses, teachers, professors, meteorologists, ministers of agriculture, bankers, business owners, engineers, social workers, agronomists, and more.  I felt like a proud parent.

When I lived there without electricity, running water, or a sewage system, my neighbors helped me to adapt to the lack of conveniences and treated me like a daughter. Since then, anything Brazilian has always been close to my heart, especially Brazilians.

I started with a photo of a unique lighthouse in Aracajú in Brazil. There was not a cloud in the sky. However, for a photo of an object that is so tall and thin, a large blank sky isn't very interesting.  So I used some photos of sea gulls and lace to create this digital composition. I chose lace for the clouds because in the small town where I lived in Brazil, many older women sat in front of their homes tatting & gossiping.  I still have a few scraps of hand-made lace I purchased from them.

Aracajú is one of Brazil's best-kept secrets. Its name was created from a combination of two words: Ara (a genus of macaws) and Cajú (the Portuguese word for the tree that bears cajú fruit and cashew nuts.) In its beautiful park near Atalaia Beach, the sides of benches are painted to resemble macaws, while trash cans are shaped like cajú fruit.

Aracajú is the capital of the small state of Sergipe. Sergipe's innovative health-care system became the blueprint for the national system which covers everyone, even tourists, in Brazil.

Situated on the Atlantic coast 10º south of the equator, Aracajú provides tourists with miles and miles of unspoiled beaches. It has the healthiest lifestyle of all major Brazilian cities and is also one of its safest and has a lower cost of living than other large cities in the country. It doesn't have the spectacular beauty of Rio de Janeiro or Iguaçu Falls, but for a relaxing beach vacation, it cannot be beat. The city has an oceanic aquarium, some interesting old government buildings with ornate architecture, and one can take side trips to several historic cities or to a gorgeous canyon along the São Francisco River.

Aracajú's temperatures hover around 82º (plus or minus a couple of degrees) during the day almost all year long, although it is slightly warmer in the summer months (Dec-Feb south of the equator) and cooler June-Aug. (However, occasionally, such as 2002, the cooler and hotter seasons reverse themselves because it is so close to the equator.) Mar-Aug are the rainiest months while Sept-Feb are drier.

Besides the area's other attributes, Sergipanos are some of the warmest, most-welcoming, helpful, and friendly people in the world. However, you won't find as many Brazilians speaking English at hotels or restaurants as you might find in larger cities, so it's best to take a phrase book with you and perhaps listen to a few Portuguese lessons from your local library so you can at least ask for directions, where to find a restroom, or request your bill at a restaurant.

I lived in a small town in Sergipe's interior during my Peace Corps Days (1967-1969) and visited Aracajú often. At that time it was a rather small city.  Now the metropolitan area has between 800,000 and 900,000 residents.  Because of it's relatively recent expansion, it has many new, modern buildings and conveniences. I spent a week there in 2011 and enjoyed every minute.

See hundreds of my photos and artistic creations on my Flickr page.

Some of my photos are straight-forward photos. Some have been manipulated into something else. Some are digital creations, which were rendered entirely with Photoshop or other enhancement software. And some are scans of hand-made works of art. A few are a combination of two or more of those.

If you are interested in a particular type of image or subject matter (such as "art from my photos" or "abstract impressions" or "Brazil") click on "Albums" to the right of my profile image. Then choose the album you want to see.

Otherwise, you will be on my photostream and be able to see everything I've posted, with the most recent first.

Click on any image for a larger view. Below each image is more info about it.  Then click on the arrows to the left & right of a photo to go forward or backward.

My photostream is very eclectic. I love all kinds of art and I like "playing with possibilities" so I am constantly trying something new. I might make 2 or 3 images using a particular technique or style, then move on to something else. Or I might create dozens in a similar style and keep going back to it.

I love teh lace clouda. A great idéa.

But, this is not Insp Photo, You should have linked to DAM! That is quite important as a link to the meme MIGHT mean another person will join. And we could use some more people don´t yoy think?

That is incredible!! You are right that the original image is rather boring, but I would never have thought to add lacy clouds like that!!! And the gulls!

Handsome building...I agree that a cloudless sky can make it somewhat boring, I like your effects♪ http://lauriekazmierczak.com/walnut-whirl/

As soon as I saw your comment, I went to my post because I thought I had forgotten to link to your site. (I set up my posts weeks in advance, so I didn't check it this morning.) The link is there and it is correct.

I just put the wrong icon on ---and it doesn't lead anywhere. I will remove the icon this week and find the correct one for next week.

However, the link is there.

Such cleverness ... what a great idea and you are right, the lace and seagulls made the picture enchanting. I am going to take some tiem to peruse your past works because you seem to have a talent way beyond the ordinary and I love the idea of learning from you. Great post, CJ ...

Andrea @ From the Sol

thanks you for the info on my photo blog. I´ll check it out. The colored pencil is only good for some images. And thanks for fixing the icon.

But it would be even better if you linked directly to the DAM post.
nfmemes has 4 different memes and that seem to be very confusing. Linking to nfmemes.blogspot.com then people don´t know what meme is the right one. Maybe I have to make some changes. :(

lovely tribute to one of your special places...