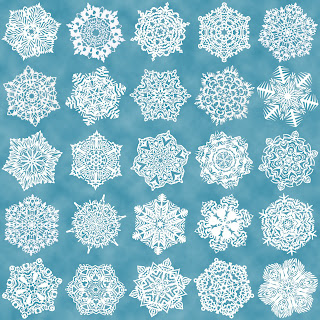 (click on image for larger view)
The challenge for his week and next on Monday Artday is "SNOW GAMES."  I imagine most people would do images of skiing, ice skating, or hockey, so I decided to follow a different path. I like games and puzzles, so I created a SNOW GAME.

Every snowflake is supposed to be unique, but in the image above there are two snowflakes that are exactly the same design.  Can you find them? 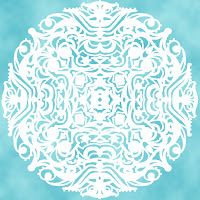 I could, of course, have created my snowflakes by cutting folded paper (see example, left) but anyone can cut their paper snowflake virtually at SnowDays.  (It takes a while to load the page, so be patient.) 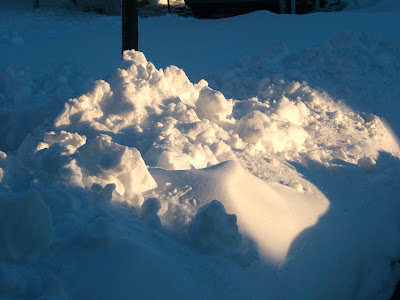 or see what others have posted.

The day after the blizzard that dumped 23 inches of snow in our yard, the sun came out and the snow, reflecting the cloudless sky, turned blue. Around 5:00 pm, when the sun was low in the sky, I snapped these shadow shots. 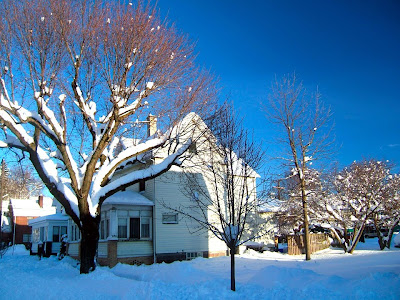 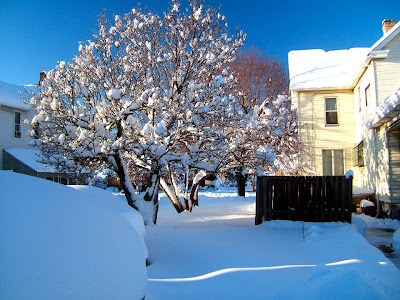 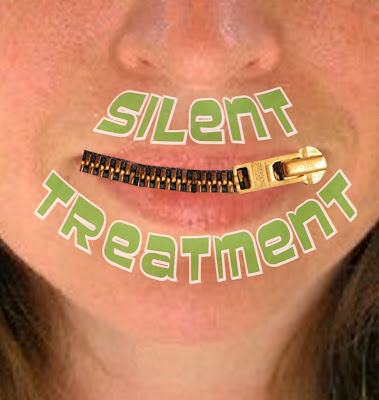 Since my mother’s death 3 months ago, I’ve been thinking of family stories to tell. The best stories usually aren’t about the good times when everything goes smoothly, but rather times of conflict.

SILENT TREATMENT
I’ve always thought the silent treatment was stupid, well, at least after about 15 minutes. I admit there are occasions when I’m spitting mad and don't want to talk until I cool down. But after a few minutes, I’m eager to talk it out. I’ve always believed the silent treatment was a bad idea, not only between individuals, but also between countries. There was a time when it was U.S. policy not to speak to the PLO, for example. Why? What can be resolved or accomplished without communication?

When I was about 12, one summer my mother was so angry at my father and sister that she wouldn’t speak to them. I have no idea why and now that my father, mother and sister are all gone, I can’t ask them. But I’m sure if it had been something important I would have remembered. My mother’s silent treatment went on for about two weeks.
I was the only family member she would speak to. This put me in a terrible position. I felt good that my mother wasn’t mad at me, too, but it also made me feel guilty that my mother spoke to me and no one else. If anyone wanted to communicate with each other, they had to do it through me. That was a terrible burden to put on a 12-year-old.
This still seems strange to me because I hardly remember my parents having even minor disagreements. They were deeply in love and truly liked one another. They were affectionate and always acted respectfully toward each other. My father often reminded my sister and me how good of a mother we had. My mother did the same about my father.
But, perhaps there was a family tradition of angry silence. As far as I know my mother’s parents never acted this way. But all three of her sisters did. By comparison, my mother’s two weeks of silence was just a blip.

SILENT TREATMENT CHAMPS
My mother’s oldest sister S was married to a man who didn’t want to go anywhere. But sometime when their youngest son was in high school (early 1960s) she convinced him to take a driving trip to Niagara Falls in July. On the way home, my uncle got mad at my aunt. My aunt and uncle communicated through notes and used their son to pass on messages until relatives showed up for Christmas dinner six month later.
My mother had two younger sisters, E & J, who didn't speak to each other for over a decade.

E was a nursing student at a time when it was forbidden to marry, but she was secretly married for several years before completing her studies. Several years later, her husband was tragically killed in an explosion at work.
The other sister, J, and her husband rented half of a duplex and became friends with their next-door neighbors, but the neighbors were having marital problems and soon the woman told my aunt she thought they were headed for divorce. The man confided to my uncle that he had been seeing another woman. He had no idea that the widow he had been dating was J’s sister E.
E married her new love without telling anyone. This was probably around 1952. When J found out that E had been dating, and then married the husband of her friend, she stopped speaking to her.
It turned out that the sisters lived only a few miles apart. Their children went to the same high school, but were unaware that their cousins were among their classmates. Both J & E’s husbands worked for the same large company. At annual picnics, their children might play softball together without knowing they were cousins.
Only when their mother (my grandmother) died about thirteen years later did the sisters break their silence. My aunt E and her second husband stayed together until his death, but I don’t think it was a happy marriage.

I don’t know what the silent treatment accomplished in any of these cases except to alienate family members, keep cousins from knowing each other, force children into situations where they had to be go-betweens between their parents, and set bad examples for everyone's children.
If you’re ever mad at me, let’s talk it out, okay? 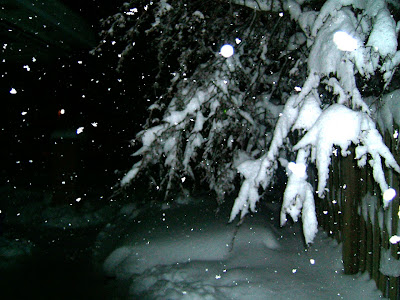 02/06/10, 3:00AM
(Click on any image for a larger view.)
Like most of the eastern U.S. we were slammed with a massive snow storm that started on Friday February 5th and lasted through the next day. Our local news talked all day on Friday about their brand new million-watt weather radar as if it were the holy grail of meteorology. The million-watt system predicted 4-8 inches of snow. By Saturday afternoon, my zero-watt yardstick showed 23 inches in our yard.
As an artist, I appreciate the beauty of the snow, but as senior citizens our arms, backs, and knees don't appreciate having to shovel it. We try to keep ahead of it by shoveling 2-3 inches at a time, but we couldn't keep up.
Starting Monday night (02/09/10) we are experiencing another big storm. We shoveled 2-3 more inches from 7:30-9:30 PM. It stopped snowing for a while, then started again after 11 PM, so we went out at 2:30 AM and shoveled 2-3 more inches. By the time we were done, there was an inch on the areas we had already shoveled. 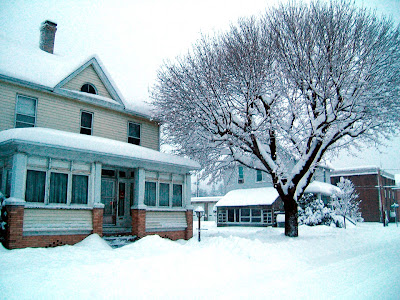 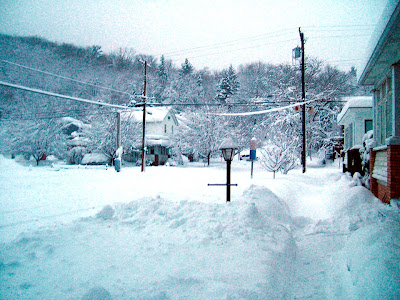 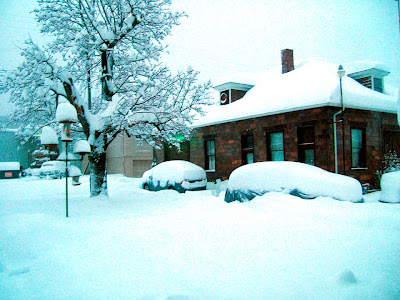 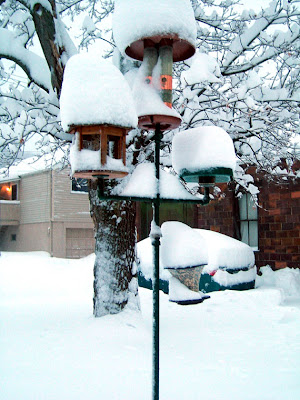 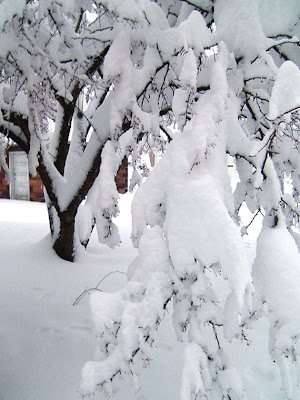 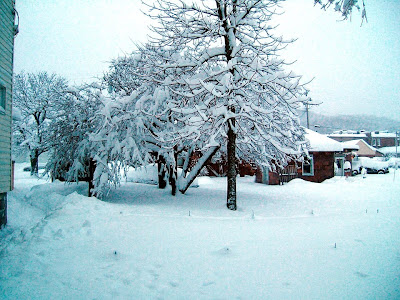 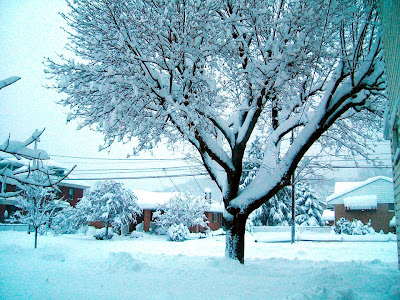 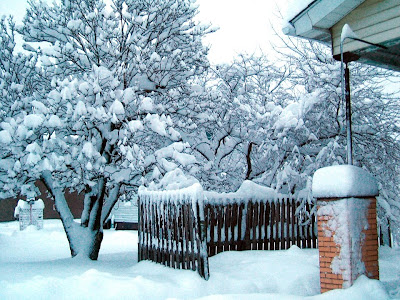 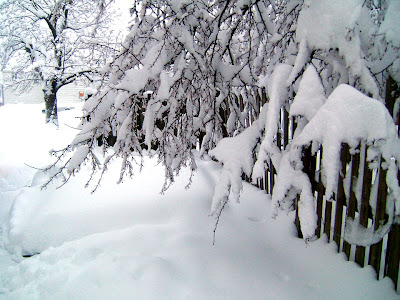 In the afternoon of 02/06/10, several more inches fell. Finally it stopped snowing and soon the sun came out. I took these photos a little after 5:00 PM: 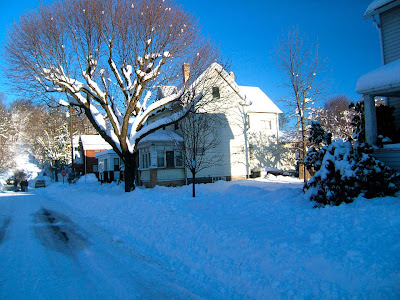 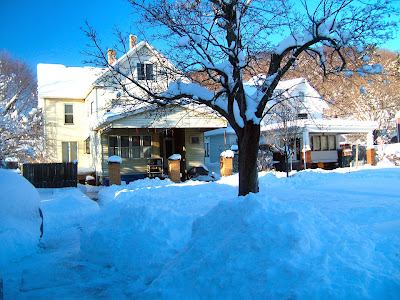 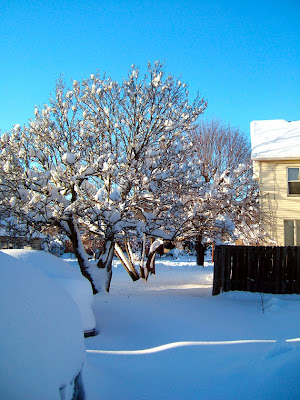 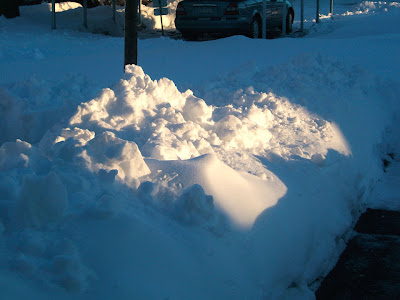 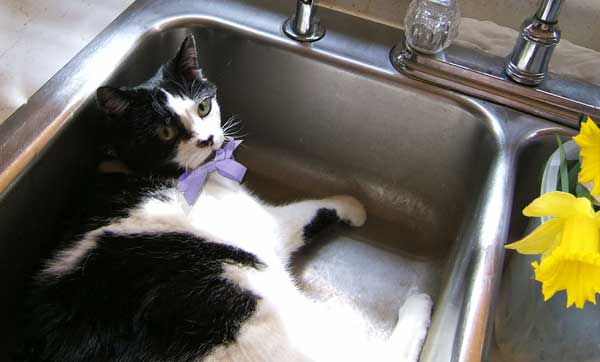 LUNETTE
Please vote for Lunette in the Spay Day Online Pet Photo Contest - and help save other pets' lives at the same time. Helping animals is important to me, and your donation will not only help my pet in the contest, but will save pets' lives by reducing pet overpopulation.

Spay Day is The Humane Society of the United States' and Humane Society International's annual event to inspire people to save animals' lives by spaying or neutering pets and feral cats. Spay Day officially takes place on the last Tuesday of February—but events will be running all through the month! The 16th annual Spay Day will be Feb. 23, 2010.

If you vote for Lunette, donations will go to Animal Friends, a Pittsburgh no-kill animal shelter where I have adopted several cats since 1978.

CLICK HERE TO VOTE
VOTING DEADLINE: MARCH 4, 2010, 10 PM EST
Thank you for your help and support.