These images are in response to
Sky Watch Friday
Click on the link and post your own photo
or see what others have posted.
All four photos were taken just after 7:00 AM on 11/26/11 in western Pennsylvania. As I was driving, at first I saw a bright red glow at the base of trees on the horizon. I pulled over to take photos.  As I watched, the sky changed from almost black to pink and blue in less than four minutes. 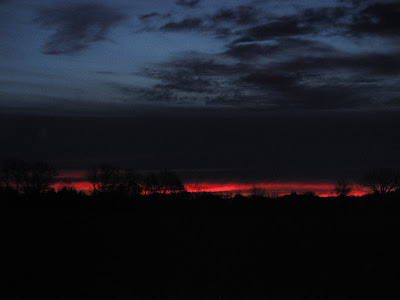 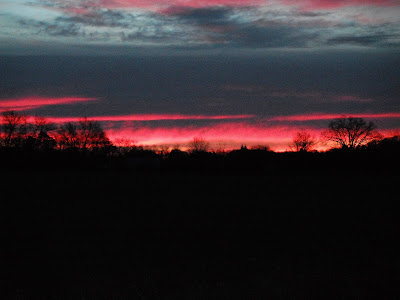 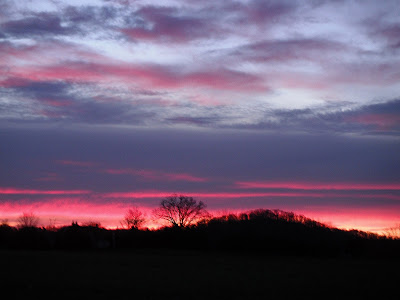 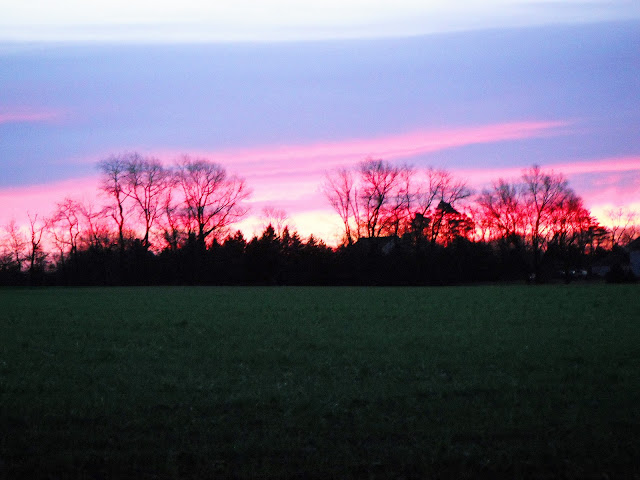 In response to the writing prompt: "List your life’s Seven Wonders. Describe the most amazing 7 things you’ve seen with your own two eyes."  on Mama’s Losin it blog. 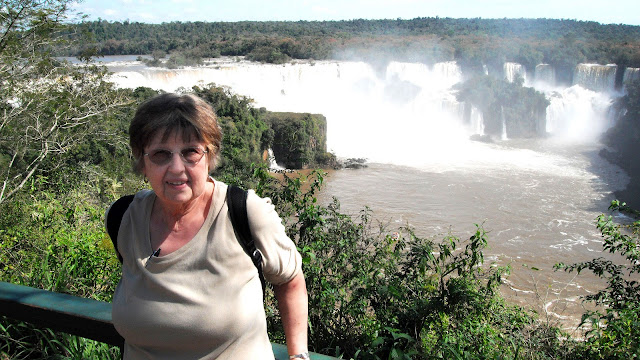 22 Things I Have Done in My Life

Mama Kat had a writing prompt to make a list of 22 things I had done in my life.  I didn't write it at the time it was posted, so I am doing it now.  Click on the link in #21 for a post about that event,

In response to the writing prompt: "Did you create a list of 22 things you’ve done in your life last week? This week, choose one item from your list and elaborate!" on Mama’s Losin it blog.

Well, my bad! I didn’t create the list of 22 things last week, but I that list will be in my next post, but I’ll elaborate on one thing I did in August, because it is something that would have made my list.

Being a Peace Corps Volunteer was one of the defining experiences of my life. I spent 2 years in Brazil, living and working in Glória, a small town in the interior of the state of Sergipe, without benefit of full-time electricity, running water, a sewage system, TV, phone service, paved roads, hospital, nor university. There was no industry and only a few small businesses. I left Brazil and the Peace Corps after 2 years of service in July of 1969.

Over the intervening years, I had always wanted to return to Sergipe. Brunie (the other Volunteer who served in Glória) and I kept in touch and discussed traveling to Brazil often, but there was always some reason we couldn’t. Besides work, family, and money issues, we had lost touch with our Brazilian friends and former students.


I won’t go into the details (you can find them HERE) but finally in 2009, 40 years after leaving Brazil, I found the email address of one person in Glória. Even though Jorge Henrique, a poet and professor, hadn’t been born when I lived there, he helped me contact others and soon Brunie and I were invited to visit Sergipe. We were told all we needed to do was pay for airfare ---we would be provided with a place to stay.

How could we refuse?

It took nearly 2 years until we could both travel (Brunie from southern CA, while I left from PA.)

On August 8th, 2011, she and I (and her husband Eric) met at the airport in Rio de Janeiro to catch a flight to Aracajú, the capital of Sergipe. We expected former students Idalécio and Célia and her sister Alcione to meet us. We were shocked to find more than 20 people at the airport, clapping, shouting, whistling ---and even a professional videographer to record our arrival.


Aracajú is now immense. Because most of the city has been built in the last 40 years, it is relatively new and therefore clean and modern with lovely parks and beaches. It is one of the best-kept secrets in Brazil ---a beautiful unspoiled and safe resort city.

One evening, we were told we were meeting "a few people" for dinner. Another 20 or so showed up. We were honored with several speeches and one former student Gil, now a professional singer, sang for us.


In addition, many people stopped by Célia's beautiful home to visit us and others invited us to visit them. We also met others at the apartment of Idalécio and his wife.

In Brazil, one can never eat enough to please one’s hosts, so after eating wonderful meals at Célia’s home, we were offered more food everywhere we went. Sisters Neuzice and Euridice took us to the beach for fresh crabs, then wanted us to have another meal at their home. (Already full of delicious crabs, we politely declined.) Idalécio and his wife Graça took us to a great restaurant for feijoada, the Brazilian national dish. Irene and Dona Guiomar both had us to their apartments for scrumptious lunches.

One former student, Valmiro, now a doctor, invited us to a restaurant to celebrate his birthday and informed us that his first child was named Bruna Carolina in our honor.

Célia's brother Wilson who owns a fabulous studio, where he is a videographer creating commercials and promotional videos, had his driver take us to many places including his farm in the country.

On our fifth day in Sergipe, we moved from Aracajú to Glória to stay with Teresa and José Augusto (both former students) in their lovely home. Again, we were fed wonderful Brazilian foods and visited by many old friends.

On Saturday night, more than 50 people showed up for another dinner reception where the former school director of the ginásio where we taught, now in his eighties, made an eloquent speech about us. It was all quite embarrassing and yet a bit thrilling.

We received tons of gifts ---luckily I hadn’t filled my suitcases. One entire piece of my luggage was overstuffed with presents ---several CDs of Brazilian music, including one from Gil, a DVD of Idalécio’s singing group and DVDs about Sergipe, tote bags, key chains and other small souvenirs of the region, a hand-knit sweater, a blouse with hand-made lace, several linens embroidered by local crafts people, T-shirts, a hat, fancy soaps, cologne, hand-decorated dish and bath towels, several books including a beautiful book of photos of Sergipe and two books of Jorge Henrique's poems, a wood-cut print, sculptures created by local folk artists ---one made by Veio, who had been a pre-teen neighbor when we had lived there.

Gifts were totally unnecessary. My best gift was just being there and seeing everyone again.

Glória has progressed. All the things I stated above that didn’t exist when I lived there are there now. There is even a cell tower in the middle of the city. The town has many businesses and several industries. It always had a market on Saturdays, but now has a huge outdoor market from Friday through Saturday that attracts buyers from three states. Whereas few vehicles existed there in 1969, the place is teaming with cars, trucks, and zillions of motorcycles, fewer horses, mules, and donkeys, but none of the familiar ox carts that used to travel the streets and roads.

Many things came together in the late 1960s. I know I was part of it, but without all the other happenings, the town may not have progressed. The National Department of Works Against Droughts built a dam to hold enough water to last through rainless years. A high school was established a few years before we arrived. A branch of the Bank of Brazil opened, providing loans for farmers and small businesses. A silo was built to store farmers’ crops so the market would not be glutted when they were harvested. An agricultural assistance agency provided an agronomist and a home economist (Irene and later Maria José.) A progressive woman, Dona Guiomar (Célia’s mother) became the elementary school director. The Brazilian Legion of Assistance started chicken cooperatives. A health center was opened and a doctor hired to visit one morning/week accompanied by Helen, a Peace Corps nurse. Nancides, an extremely intelligent, hard-working, eloquent, and humorous bank worker who also taught night classes at the high school, became the president of a Municipal Commission set up to make positive changes in the town. Brunie arrived in 1966 and started literacy classes. I arrived one year later and took over Brunie’s high school teaching duties so that she could concentrate on health and sanitation projects.

Best of all, despite there being no colégio nor universidade in the town, nearly all of our students managed to continue their educations. They are doctors, lawyers, professors, engineers, agronomists, social workers, nurses, teachers. Some work for the state’s health service. One is a meteorologist. One became a minister of agriculture. One was the first woman to work for the Bank of Brazil in Sergipe and when she retired, became a lawyer.

If there was any doubt that we had made an impact, the doubts are gone.

Yet, as a Peace Corps Volunteer, I gained so much more than I left in Glória. I have thought about Brazil and especially about Glória nearly every day since 1969. I consider myself extremely fortunate to have had the opportunity to live and work there, to learn Portuguese, to know and appreciate the wonderful Brazilians and their culture, and also the opportunity to return 42 years later.

And while I was in Brazil in August, I decided I was going to do two things I had always regretted missing. First we visited the Amazon region. We were able to visit Nancides' daughter Erika in Manaus. Erika's father had died when she was only 11, so she was happy to meet us and hear stories about her father, even before her mother knew him. Then, while Brunie and Eric headed home, I went on to Iguaçu Falls.

And although, the rainforest and waterfalls are spectacular natural wonders, nothing compares to the reception we received from our friends and former students in Sergipe.

If you are interested, you can read many stories about my experiences as a Peace Corps Volunteer on my other blog: A Little “Peace” of Brazil
Posted by CJ at 6:38 AM 2 comments: