What do you think would happen if we treated those who wanted to purchase guns the way we treat women who want abortions? (See image at the bottom of the page.)

First, I want to preface this with  ---I would be very happy if there were never another abortion. I don't like the idea of abortions.  I wish that everyone would use birth control or common sense so that unwanted pregnancies would not happen.  However, they do happen and I also believe a woman has the right to choose a safe and legal abortion and that belief was confirmed by a Supreme Court ruling decades ago.

The problem is that the same people who are against abortion are also against birth control, condom distribution, and sex education.  Back in the 1970's Elie Smeal, who was the president of N.O.W., tried to set up a dialog with anti-abortionists to come up with a plan to reduce the number of abortions.  They would not even respond to her appeal to meet to discuss common ground.

A few days ago, President Obama gave a speech about another school shooting in Oregon.  The President was visibly upset and frustrated by routine coverage of such incidents by the media and the lack of sensible gun control legislation which has been blocked time and again by a mostly-Republican Congress.

When Jeb Bush was asked to comment on the killings in Oregon, he responded with "Stuff happens."  How callus can one be to such a tragedy?

I know there are Democrats who oppose gun control, so it is not only a Republican issue. I also know that the majority of NRA members are law-abiding citizens who use guns for harmless target practice or to provide food for their families. I also know that most of the perpetrators of gun violence are mentally ill and we need to address mental-health issues in conjunction with gun control.

Yet, poll after poll shows that most Americans, even NRA members, are in favor of sensible gun control laws.

I see the real problem as the leadership of the NRA that makes senseless arguments against gun control.  Why would they do that after seeing students killed in Columbine High School?  They even scheduled their next convention in Colorado, almost throwing those deaths in the face of the Colorado population. Why would they continue such senseless arguments after all the other senseless shootings, including the one where elementary school children were gunned down in Connecticut?

It might be because the NRA receives the majority of its funding from gun manufacturers and I wouldn't doubt that the NRA leaders get a big chunk of that cash.

We can't ignore that gun-manufacture lobbies and the NRA donate billions to campaign funds to those legislators who continue to oppose sensible control laws.

The NRA leadership says that we should have more guns in schools. They claim that if more people carried guns, there would be fewer deaths from mass shootings.  It's crazy talk.

First, there is the possibility that an innocent third party could be caught in the crossfire.

There are instances where people have been jailed, not for starting a shooting, but because they happened to have a gun and fired back.

If someone steps up with a gun to kill the perpetrator, s/he could become a victim.  What's to prevent the police from assuming that any person holding a gun is one of the perpetrators? (Read more HERE.)

Compare the number of annual gun deaths in various countries.  I was surprised there were over 100 in Japan.  I thought 300+ in Germany was a high number.  But compare those numbers to over 11,000 in the U.S., as reported in Michael Moore's "Bowling for Columbine" in 2002.

Notice that there are nearly twice the number of suicides as homicides in this country. Most people contemplating suicide want a quick and painless way to kill themselves. Thus, I wonder how many could be prevented if potential victims didn't have access to guns.  I'm sure many would find another means, but still, I think the numbers would go down.

The Israeli army was able to drastically drop the number of suicide deaths among its soldiers by requiring them to leave weapons at the army base when off-duty, a fact that seems to fly in the face of the claim that more guns in people's hands will prevent gun deaths and suggests that lack of a firearm might prevent some suicides.

I understand that the gun control issue is not clear cut.  A good article at FactCheck.org points out the variables. The article can be found HERE.  It compares Barack Obama's claim that states with the most guns laws have fewer gun deaths with Carly Fiorina's claim that areas with stringent gun control laws have higher gun-crime rates. (Note that the wording is different in Obama's claim and Fiorina's.)

FactCheck.org examines the claims. The causation of gun crime and gun deaths cannot be proved because there are many factors that might contribute to gun violence/deaths including poverty, lower educational attainment, more rural areas that might make getting to a hospital in time to save one's life difficult.

However, overall, the report seems to confirm Obama's claim rather than Fiorina's.

Compare the lack of response to the gun-control issue in Congress to the relentless outcry against Planned Parenthood, based on an edited video created by an anti-abortion group, that contained false information and implications.

The outcry comes mostly from Republican men. They ignore most of the services provided by Planned Parenthood ---breast, ovarian and other cancer screenings, birth control, menstruation problems, infertility, yeast infections, urinary tract infections, STDs, menopause (to list only some of the serves provided.) Those who oppose Planned Parenthood even ignore sexual health services for men, including vasectomies.

In addition, they act as if the money the federal government pays to Planned Parenthood is a giveaway, whereas it is actually reimbursement for health services provided. No federal funds are used for abortions.

At a Congressional hearing, one hapless Congressman put up a totally misleading chart that he claimed came from Planned Parenthood.  In reality it was created by an anti-abortion group. At the bottom of the chart it clearly states "Source: Americans United for Life." Among other things, its figures were incorrect and the chart made 327,000 look like it was a higher number than 935,573. (See the chart and a correction to make it accurate at the link above beginning with "totally misleading.")

So I direct you to "How about we treat every man who wants to buy a gun like every woman who wants an abortion." 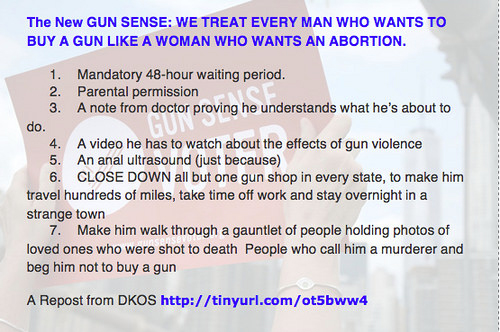 They interviewed people in Colorado (http://www.cbsnews.com/news/guns-a-family-affair/) who use guns for hunting and need them for protection on large ranches where they might run into bears or wolves. I have no problem with that. However, I did question the wisdom of teaching children to shoot, some beginning as young as 5. I don't believe a 5-year-old is mature enough to determine if and when the use of a gun is warranted.

I do have problems with gun owners who think they need assault rifles and those who don't lock their guns to keep them from children. About 100 children die each year in the U.S. at the hands of other children when playing with guns. I read a news report a few days ago about a woman in Florida who was shot in the back through her driver's seat by her 4 year old who found her gun in the car. The woman was not seriously injured, but she was a big gun advocate who wasn't responsible enough to keep her loaded gun away from a 4-year-old. (Poetic justice, perhaps?)

A study was done, putting 2 or 3 12-year-old boys in a room and leaving them alone for a while. If they were curious enough to open a drawer, they would find a gun. Video showed the boys aiming it at themselves or each other. Sensors on the gun showed that 1/3 of the boys who found the gun (unloaded, of course) pulled the trigger enough to discharge it. Half later said they couldn't tell the difference between a real gun and a toy. Those who have shot and killed another child are also victims, some dropping out of school and becoming involved in drug use. (See more here: http://www.cbsnews.com/news/the-other-victim-of-an-accidental-shooting/)

The most interesting report (http://www.cbsnews.com/news/how-australia-dealt-with-mass-shootings/) was about a mass shooting in Australia that killed 35 people in 1996. Within 12 days, the new Prime Minister John Howard convinced the legislature to pass strict gun laws. Excerpts from the CBS report:


The tough new laws banned the sale and importation of all automatic and semi-automatic rifles and shotguns; forced people to present a legitimate reason, and wait 28 days to buy a firearm; and perhaps most significantly, called for a massive, mandatory gun-buyback. Australia's government confiscated and destroyed nearly 700,000 firearms, reducing the number of gun-owning households by half.

"People used to say to me, 'You violated my human rights by taking away my gun,'" Howard said. "And I'd [respond], 'I understand that. Will you please understand the argument, the greatest human right of all is to live a safe life without fear of random murder.'"

In the 15 years before the laws were passed, there were 13 mass shootings in Australia. In the two decades since, there has not been one.  Plus, gun homicides decreased by nearly 60 percent.

Locking up your guns and ammunition in separate safes is another regulation, as are surprise inspections by police.

American lawyer and wine-maker Greg Melick had to part with some of his prized guns in the buy-back. He still owns about two dozen weapons, which he uses for sport, hunting, and shooting pests on his vineyard.

Melick sees gun ownership not as a right, but a privilege. "I'd be very uncomfortable going back to the way it was before, when anybody could go in and buy a firearm," he said. "It's just bizarre, the number of people getting killed in the United States. And you have these ridiculous arguments: 'Well, people carry guns so they can defend themselves.'

From Tasmania, to Sydney... we kept asking if there were lessons for the U.S. in all of this.

"I am loath to comment," said Loughton [whose 15-year-old daughter was killed in the 1996 mass shooting]. "But my question is, 'How is it going for you over there?' But I can't answer that for you. My heart goes out to all of you over there in America."