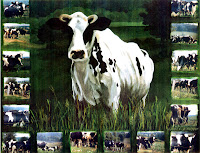 "meMOOries"
mixed media (acrylic painting with photographs on stretched canvas)
(©2001 C.J.Peiffer)
LIFE BEGINS
(©1995 C.J. Peiffer)
The new-born calf,
his damp black and white hairs plastered to his hide,
huge brown eyes bewildered in his new-found world,
rests, legs bent under him in the moist straw.
He raises his tiny head, is half up on one thin wobbly leg.
Unsteady, he falls, slumping to his straw bed, exhausted.
Another try and he is up, all trembling legs, scared eyes,
and quivering ears.
The cow licks him with her large, rough tongue
and nuzzles him under her belly toward her warm milk
to fill his uncertain emptiness.
Posted by CJ at 1:23 AM No comments:

THE JOYS OF WINTER #1 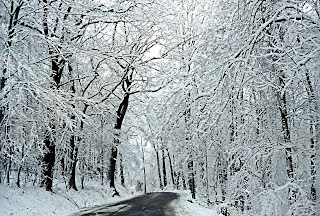 The building where I used to work as a customer service representative for a wireless phone company was positioned on a hill and caught strong winds in almost any weather. Although the streets were usually just wet or slushy, the parking lot was often icy in winter.
One day a few years ago, because my husband was working on my car, I drove his old car to work. It was bitter cold with a wind chill factor below zero.
A little after 2 a.m., I was the last worker out of the building, except for a small overnight crew. Bundled in heavy winter gear, I treaded carefully on the slick blacktop to the car.
Attempting to place my key in the driver's side door, I found the lock was frozen. I tried the passenger side. The lock popped open immediately, but the door was frozen shut and would not budge. The parking lot was huge. Being on the late shift, I had to park at the far end of the lot, just about in the next county, so I wanted to avoid returning to the building for help from security or cleaning personnel, so I tried unlocking the other door again. No luck.
I went back to the passenger door. After pounding on it around the window and kicking the lower edge of the door, it finally and reluctantly came open, hinges screeching as if it hadn't been opened in years. I reached across the seat to unlock the driver's door and was able to enter the car.
In the dark, I couldn't tell which was the ignition key because my glasses had steamed up, due the the physical effort I had exerted on the opposite door. I tried wiping my glasses with my gloved fingers. One lens popped out and landed near my feet. I couldn't remember how to turn on the interior light under the dash (rarely drive my husband's car), so I thought I could simply open the door, the dome light would go on, and I could search for my lens before accidentally crushing it with my foot.
I grabbed the interior door handle. With a loud crack, it snapped off in my hand.
Before the handle broke, the door had opened just a fraction and the dome light had gone on. I was able to find the lens, which I reinserted into its frame.
But then, I couldn't open the door without the handle nor shut it enough to make the light go off. I tried the power window, thinking I could reach the outside handle to open the door, but the window would not budge. It was a 20 minute drive to home ---a little longer at night as I drove slowly to avoid hitting deer or icy patches. I would have to drive home with the interior light on.
The car was a little sluggish on the startup, but the engine did turn over. I drove slowly to the end of the driveway, turned left down a small grade. When I tramped on the gas to accelerate, nothing happened, as if the car were in neutral. I let it coast down the hill a little, then hit the gas again. It accelerated.
After the next stop sign, I needed to turn right. When I hit the gas pedal, the car slowly drifted around the corner, but would not accelerate. I was now about a quarter of a mile from the parking lot, but still in the industrial complex, so at least I was out of traffic, what little there was at that hour.
I contemplated my alternatives. The AAA 800 line was probably swamped with calls in that frigid weather. I could call them on my cell phone, but it was bound to be a long wait. I didn't want to hoof it back to the building either. And since my car was not in working order, it was useless to call home.
I sat with the engine running for about 5 minutes, every so often stepping on the gas. Nothing. Finally, I tried putting the car in second gear. Again, nothing. Then I tried first gear ---and the car moved. I drove slowly to the next stop sign, then put the car in second, and after another quarter mile, back to drive.
As I traveled over bumps in the road, the interior light flickered on and off for the entire drive home.
In my driveway, I crawled over the seat and out the passenger door, no easy feat for an out-of shape senior citizen. I opened the driver's side from the outside and slammed the door shut to turn off the interior light.
In the house, I found my husband, worried because I was so much later than usual. I handed him the broken door handle.
He often says that I only need to touch a piece of machinery and it instantly falls apart.

See also THE JOYS OF WINTER #2