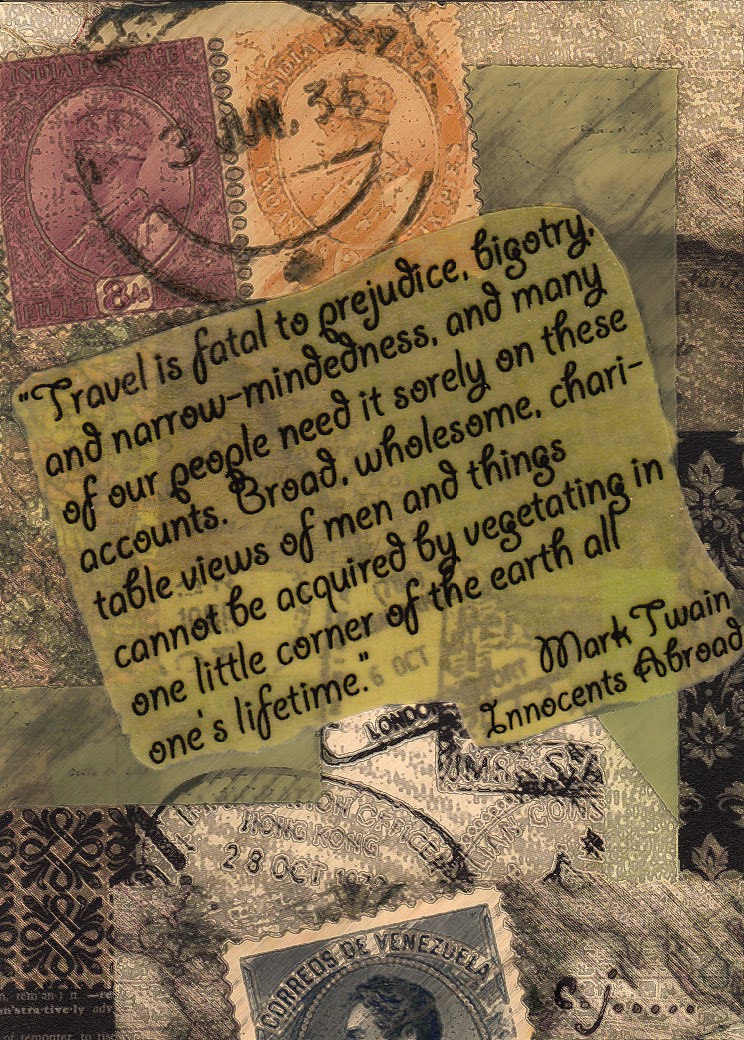 I read several of Mark Twain's books as a pre-teen and teen ---those featuring Tom Sawyer, Huckleberry Finn, a Connecticut Yankee,The Prince and the Pauper.

But I became a Twain fan (or Twainiac) once I started to read his social commentary. Most of what he wrote is as relevant today as it was when Twain wrote it.

Many think that Twain was born in Missouri (1835) and never left. But after age 17, he lived and worked in Cincinnati, New York City, Washington, Philadelphia, Nevada, California, The Sandwich Islands (Hawaii), Buffalo, Elmira, and Hartford. He traveled up and down the Mississippi River, around the world, and spent many years living in Europe.

In 1867, before he became famous, a newspaper paid him to travel on a six-month cruise to Europe and the Holy Land and send letters back to the paper.  At that time, Europe was supposed to be the center of high culture while many Europeans considered America to be a savage land inhabited by frontiersmen and uneducated bumpkins.

Americans loved Twain's reports of his travels.  Upon his return to America, he compiled his letters and some additional observations into a book. Innocents Abroad became a hit with the public and set him on his way to being the most famous and recognizable man in America by the end of his life in 1910.

Innocents Abroad is filled with Twain's unique observations and much humor ---poking fun at the Europeans and their culture ---but there are also gems of wisdom in it, including the quotation I added to the Artist Trading Card pictured here.

The quotation became especially meaningful to me after living and working in the hinterland of Brazil for several years.  It was then that I realized that any culture in any part of the world is no better or worse than any other, only different.
Posted by CJ at 2:59 AM

Great work, not sure you did it and I like that! Intriguing. Nikki xx

I think Nikki meant she wasn't sure HOW I did it.

First I made a collage. The text was printed on my computer on some transparent paper I found a long time ago and have rarely used. I cut it and glued it over the collage.

Then I scanned the result and did a little (not much) digital manipulation.

Since I retired from teaching art, I spend at least 8 hr/day with my true love ----Photoshop ---creating art, scanning and manipulating my hand-made art, and enhancing my photos.