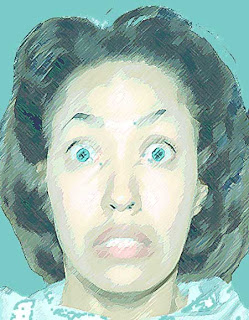 In response to a writing prompt on Mama’s Losin It blog:
Describe a moment when you felt afraid.


When I was a college sophomore, I lived in a dorm that had suites. Each suite had an entryway, a bathrooom on the right, a huge walk-in closet with four separate sections on the left, and two bedrooms straight ahead.
The dorm was located on a hillside. We were on the second floor against the hill, so our bedroom windows were at ground level. A private residence and a garage were only about four feet from that side of the dorm, so it was pretty dark outside of our windows, which had both blinds and curtains for privacy.
Joann and I roomed together, while Barb and Sandy had the other room. Sandy was a bit of an airhead, so when she claimed that there were prowlers outside of our windows, we didn’t believe her.
After it was reported to the house mother, the police got involved and sent a police car around several times an hour after dark, but never found anyone. The house mother thought it was probably either local high school boys or male college students, trying to get a peek inside the girl’s dorm. Both she and the police thought the prowlers, if there were any, were harmless, but lots of the residents became rather paranoid about the situation.
I had the reputation of being cool headed and skeptical, so when some girls from the third floor thought someone was watching the dorm from inside the garage next door, they called me to their room. I saw someone was indeed there, but it looked like the person was wearing a dark coat with two vertical rows of shiny buttons that occasionally caught the light. I surmised it was a police uniform and that an officer had been stationed there to catch the culprits. The girls in the room didn’t believe me, so they reported it to the house mother who called the police ---and sure enough, I had been right. They ended up “outing” the hidden policeman.
This went on for several months. Girls claimed someone was scratching at the screens on their windows. Others swore they heard whispers outside. I never heard a thing even though my bed was against the wall directly under our window.
It was winter, so it got dark early. One evening after dinner, the four of us were in Barb and Sandy’s room. We were gabbing away and munching on popcorn. We often kept cans of soda on the window sill to keep them cold and one of us had taken a can from the sill.
Suddenly Joann stopped in mid-sentence. I looked up to see that she looked like a deer caught in the headlights, staring at the window. When the soda had been retireved, the blind had curled up and was caught on the curtain, so there was a small triangle of window exposed, and outside the window was a set of staring eyes. 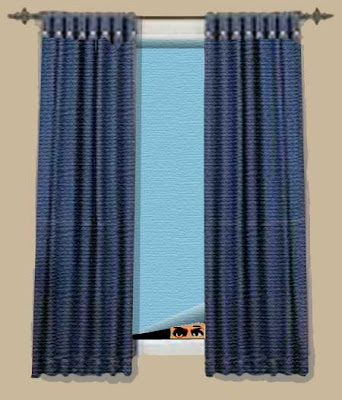 I had never been afraid of the “prowler” mainly because I didn’t really believe he existed, so I got up to walk across the room to pull the blind down. I took two steps and suddenly, my knees buckled and I fell down hard. Instantly I was so afraid that I couldn’t get up and ended up “walking” to the window on my knees. It seemed like I was moving in slow motion, taking forever to get to the window. I was trying to shout, “Get the hell out of here” but I couldn’t speak or scream.
When I finally got to the window, I pulled the blind so hard that it came off the roller, exposing the entire room to the outside. I retreated, still on my knees, to a corner to the left of the window where I couldn’t be seen.
Meanwhile, Joann, Barb, and Sandy had fled to the house mother’s apartment and had her call the police (long before cell phones existed.) By the time the police arrived, the peeping Tom was long gone. The poice asked for a description, but both Joann and I had seen dark eyes, nothing else.
I calmed down rather quickly, but later that night Joann and I moved my bed away from the window. I had huge bruises on both knees for days. The prowler seemed to disappear after that and we got through the rest of our sophomore year without incidence.
Sandy dropped out of school that summer to marry her high school boyfriend. Joann decided to take a year off to work, so graduated a year after Barb and I who found new roomates for our junior year when we moved to the lower floor on the opposite side of the dorm next to a busy and well-lit parking lot.
Since then, I have always worried that if I were ever in real danger or in an emergency situation, I would not be able to scream or run away, that I would simply freeze in place and become a victim. Occasionally, I have a nightmare that I am in danger and can’t even manage to dial a phone to call for help, let alone move, run, or scream.
Luckily I have never been in such a situation, so I still don’t know how I would react if I were afraid again. I hope I never have to find out.

I had something bizarrely similar happen to me and my reaction was the very same as yours! I've always worried about how I'd react if I was frightened like that again. Indeed, in nightmares, I can never scream... I try, but nothing comes out and I'm frozen on the spot. It's worrisome!

Yikes! I got kind of freaked out reading that! I'm afraid how I would react in a situation like this too ... I hope I don't have to find out!