Chelle, at Journal52, posts an Art Journal prompt each week. I'm jumping in on week 24 for 2014. Well, actually I cheated and posted a slightly older image on the Journal52 Flickr site that combined themes for Week 22 (Travel) and Week 23 (Passion.) That image can be found HERE.

The Week 24 theme is COURAGE. (Scroll to the bottom of the page to learn how I created this image.) 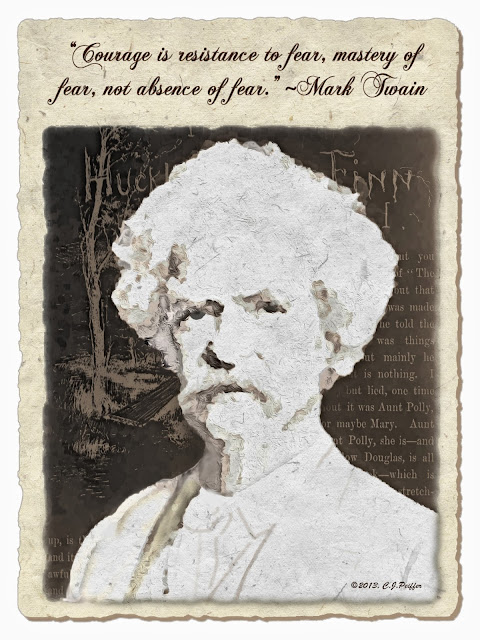 I'm a big Mark Twain fan so I used his quote on courage. I admire his courage to write the truth about many things no one wanted to hear.

Most people know Twain as the creator of characters such as Tom Sawyer and Huckleberry Finn. They think of him as the quintessential American writer and think he lived his entire life in Hannibal, Missouri.

Yet during his lifetime, most people thought of him as a travel writer for his stories about a his first trip to Europe and the Holy Land in Innocents Abroad, his travels to the West in Roughing It, and other world travels in A Tramp Abroad and Following the Equator.

In fact, after the age of 17, he lived in Philadelphia, Washington, New York City, Nevada, San Francisco, Hartford and Redding (CT) and spent many years in Europe even when he wasn't on lecture tours.

In 1867 when he made his first trip abroad, many thought Europe was the most civilized and cultured area of the world and that Americans were nothing but country bumpkins. But Twain delighted Americans by poking fun at European culture and even found humor in the Holy Land.

My interest in Twain began when I read his novels as a preteen and teenager. But I became a Twain fanatic when I started to read his social commentary a few years later. Twain had the knack of poking fun at the human race, condemning us for our many unreasonable thoughts and actions, and making us laugh at ourselves at the same time.

Huckleberry Finn has been condemned in recent years over the use of the "N" word, yet Huck Finn was a controversial character as soon as the book was published, not for word usage or racism, but because Huck was the 1800's version of a juvenile delinquent and many (including Louisa May Alcott) thought the book would corrupt youth. Many libraries refused to carry it. Twain laughed it off because he knew people would have to purchase it if libraries didn't carry it.

Twain grew up in Missouri when it was as slave-holding state.* At that time, it was not only "normal" to think slavery was okay, it was good for the local economy, the churches used the Bible to justify slavery, and those who openly condemned it ran the risk of being tarred and feathered, if not run out of town. Years later, Twain married into an abolitionist New England family and grew to see the error of his childhood indoctrination.

Twain had started Huck Finn in 1876 and then left it untouched for several years. In the early 1880s, he traveled to the Mississippi River and saw that not much had changed for former slaves since the Civil War. When he returned to Hartford, he completed the novel set in pre-Civil War days. It was finally published in 1885.

His characters spoke as they would have then, and that included using the "N" word. Yet, when Huck traveled on a raft with the slave Jim, he realized that slaves had feelings just like white people, that they loved their families and were good and caring people. Yet Huck believed he would go to hell if he didn't turn in a runaway slave. He struggled with these opposing attitudes but eventually decided that he could not turn in his friend Jim and that he would just have to go to hell.  Twain was the first American writer who gave a black person a voice.

Despite the humor, Twain was dead serious about important topics of his day. He had the courage to tell the truth, even if he had to cloak it in humor to make it palatable and to attract and hold people's attention. Most of his thoughts are as relevant today as they were during Twain's life.

________________
*Searching for Jim by Terrell Dempsey is an eye-opening account of slavery in Hannibal during Mark Twain's youth.  I learned a great deal that I didn't know about slavery from this book. Dempsey, a lawyer who lives and practices in Hannibal was helping his daughter with a school project at the local library when he ran across a wealth of information on slavery there. At that time, all the tourist attractions in Hannibal virtually ignored the fact that it had been a slave-holding area when the young Mark Twain lived there. (When I visited Hannibal in 2001, a play based on Huckleberry Finn, written especially for tourists, didn't even have the character Jim in it.) Dempsey decided to do more research which eventually resulted in his book.
**Find thousands of authentic Twain quotes on hundreds of topics HERE.
Note the word "authentic." Just about every humorous thought or maxim that vaguely sounds like Twain might have said it has been attributed to him. Many cannot be confirmed as true Twainisms. However, if you click on my link, all the quotes you will find there have been verified as being said or written by Twain. That directory of Twain quotations was gathered by respected Twain scholar, Barbara Schmidt. Also see The Quotable Mark Twain by another Twain scholar, R.Kent Rasmussen.

(Disclosure about my footnotes: I have met and corresponded with Barbara Schmidt and know Kent Rasmussen and Terrell Dempsey, although none of them are close friends. All three do quality work, and my endorsement should not be tainted by my acquaintance with them.)
________________
How I created my image:

I scanned a piece of recycled paper and "tore" the edges with my mouse, added some depth and shading to it.

I scanned page one of a very old version of Huckleberry Finn, then inverted the colors and change it to a brownish tone for the background. After feathering the edges  I added this to a layer above the recycled paper.

I used a photo of Twain and reduced it to the very darkest and lightest areas to give it the appearance of a sketch or ink drawing, changed it to sepia and then did "hand-drawing" (with my mouse) to add shading and details that disappeared when I reduced it to lightest and darkest areas and added some texture. Twain's image was added to a layer above the book page.

Finally I added the quote using a script I thought to be reminiscent of the Victorian era in which Twain lived.