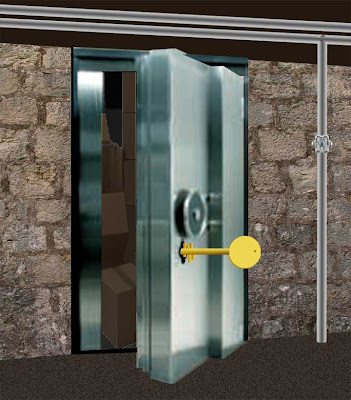 (click on image for larger view)
This short story is in response to
RAVEN’S SATURDAY
WORDZZLE CHALLENGE
Click on the above link to join in or read other entries.
How it works: Raven supplies two sets of words (or phrases) to use in a piece of writing. One can choose the ten- or five-word challenge ---or combine both into a fifteen word mega-challenge.

Ten-word challenge:
nausea, everything is on sale, expect great things, frying pan, pledge, birds of a feather, stick, Saturday morning, liver and bacon, caterpillars
(Words from the challenge are in bold face in the story.)


This is a continuation of previous entries:
STORMY WEATHER Part 1, Part 2, Part 3, Part 4, and Part 5
STORMY WEATHER Part 6
On Saturday morning, Parker and I headed for Miss Cowpepper’s house. The night before I had told him about the safe the workers and I had found in the basement. We worried that with a few people now knowing that the elderly woman had a huge, bank-vault-sized safe, she might be a target for thieves.
Parker’s father had been a locksmith and Parker had helped him during school vacations, so he knew a bit about locks for doors and windows. We decided he would check Miss Cowpepper’s house to see how secure it was.
Meanwhile, I still had to inform Miss Cowpepper of the safe that had been hidden in her basement. She had been napping the day before when I left. I was both worried about her and excited for her, causing me a bit of nervous nausea that morning.
Miss Cowpepper opened the door a crack, but scurried away when I told her Parker was with me. She was an albino recluse who didn’t like visitors.
I helped Miss Cowpepper up the stairs, then I continued my work from the day before, organizing things in the dining room after the recent flood had filled the basement and left an inch of water on the first floor. Parker had been helping the Jennings down the street, but their grown children were visiting from out of town for the weekend to help their parents, so he wasn’t needed.
After checking the doors and windows and measuring the opening where the safe sat, Parker made a list for Lowe’s™. He would buy locks, hardware, and materials to create a new door to cover the opening where the safe sat in the basement.
Before he left, I went upstairs to ask Miss Cowpepper if she needed anything else. She sat in a rocking chair in her bedroom watching TV.
“Why thank you, for asking,” she said. “I just saw an ad for Shopper’s Market. It seems that nearly everything is on sale. You know, I have had a craving for liver and bacon for the longest time. And onions, too. Those Meals on Wheels dinners are good, but they never have liver. Can you cook the liver for me?”
I wasn't much of a cook, but I assured her I could.
At the front door, when I handed Parker the shopping list, he said to me, “Now Rosie, don’t expect great things from that safe. It may be empty.”
“I know. I know,” I said. The night before I had been fantasizing about what might be in Miss Cowpepper’s vault. He knew how I could build things up in my head and then be disappointed.
“Promise?” he asked.
Held up my right hand. “I pledge not to get my hopes up or let Miss Cowpepper get hers up until we check the contents of the safe.”
He kissed me on the cheek and left.
In the kitchen, I found a frying pan and other things we would need to make lunch, then set the table for three. Upstairs, in Miss Cowpepper’s bedroom, I sat on the floor, leaning against the bed and watching a program on the Discovery Channel while the eighty-year-old snoozed in her chair. I dozed off in the middle of watching caterpillars inch their way along a stick.
I awoke when Parker called from the base of the stairs. I helped him to cook liver, mashed potatoes and green beans as Miss Cowpepper had requested.
When I went upstairs to wake her for lunch, Miss Cowpepper was watching a program about humming birds. She told me that besides old movies, her favorite shows were about nature, especially animals.
“You and my husband are birds of a feather,” I told her. “That’s exactly what he likes to watch. I think you’d like him. Would you be willing to meet him?”
She looked dubious.
“Actually, I’m not nearly as good in the kitchen as he is. When he returned from the store, he started to cook all your favorites for lunch.”
“Well, I do smell the bacon and the onions.” She sighed. “I guess if he went to the bother of cooking for me, I can meet him. He won’t laugh at me, will he?”
I assured her he would not.
Over lunch, Miss Cowpepper and Parker discussed old films. It was as if she had been wanting to discuss all the films she had ever seen, but there had been no one for her to talk to. Miss Cowpepper left nothing on her plate. We finished our meal with chocolate ice cream and chocolate sauce.
While Parker cleared the table, I told Miss Cowpepper I had some exciting news for her. She just nodded, so I went on. “I think I discovered what the key thing is for.” Her eyes lit up. “Can you come with me to the basement?” I asked.
I stopped in the dining room to remove the key from the wall. Miss Cowpepper hobbled with her cane to the basement. Parker and I followed behind.
I steered the woman to the opening in the wall to show her the safe which had been hidden behind rotten wood that the workers had removed when cleaning up after the flood.
“Oh my,” she said. I never knew anything was behind that old piece of wood.”
I inserted the key into the hole in the vault door. It slipped in easily. I tried to turn it clockwise, but nothing happened. When I turned it in the opposite direction, it clicked. Parker came over to help me pull on the heavy vault door, but I didn’t need his help. It was so perfectly balanced that, with a light touch it swung wide open.

(to be continued in Part 7, the final
episode of STORMY WEATHER, next week)

I think I'm going to hate to see this series end. It has been so enjoyable. You work the words in so well. I really like what you did with caterpillars and stick which just drove me up the wall.
Well done

Oh I want to know so bad what is in that safe.

Now you have the dragons betting on what is in that safe. What a wonderful story. We forgot all about Raven's words when we read it.

Oh, no! I have to wait another week to find out about the contents of the safe?!! I'm with Dr. John, I hate to see it end but I'm also looking forward to finding the answer to the mystery. You've created three characters I really care about. Great writing.

Nicely done and a perfect ending this week. I look forward to learning what the safe holds.

Oh crikey we've got to wait until next week to find out what's in the vault????

Great writing, I love a cliffhanger. :)

I've enjoyed reading the continuing story, and it's a little sad it will end soon. Maybe we'll see Miss Cowpepper and the other people occasionally in other stories. I'm glad we're going to see what's in the big safe, though. I hope it has something good. I liked the caterpillars on the stick, too.

It is just amazing to me how effortlessly you work those words in ... and I want to know what is in the safe. I've been lurking along a bit I must confess.

And thank you for your Larry McMurtry comment! You leave the most amazing, informative, comprehensive comments ... I just love them. THANK YOU!