LAUGHING IN THE RAIN - Short Fiction 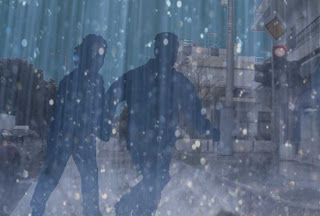 This short story is in response to
RAVEN’S SATURDAY
WORDZZLE CHALLENGE
Click on the above link to join in or read other entries.
How it works: Raven supplies two sets of words (or phrases) to use in a piece of writing. One can choose the ten- or five-word challenge ---or combine both into a fifteen word mega-challenge.
Mega Challenge: Chorus line, clam chowder, apples, jack-in-the-box, puddles, Iran, quarry, housekeeping, speed, letter, motorcycle, grandiose, summer, flying off the handle, blue jays
(Words from the challenge are in bold face in the story.)
After spending time at Miss Cowpepper’s, helping her clean up after a flood, I realized she was not the only one who needed help with house cleaning.
As a right-brained artist, I am organizationally impaired. Sometimes I drive Parker crazy. I’m lucky he isn’t the type to be flying off the handle all the time or we would be in a constant battle over the housekeeping.
My sister Marigold helped me create a weekly task list to get my house under control. I was already weeks behind, because what would take her a day to accomplish, took me two weeks.
This week’s task was to clean the closet in the spare room and get rid of anything I hadn’t used in two years. I found old clothes and old tax returns. I pulled out dusty tapes and CDs, including my parents’ album of A Chorus Line. There were copies of high school and college yearbooks. In a corner, I located a toy motorcycle my nephew had left there the summer he was eight. Now he’s twenty-one. I found figurines of blue jays I never liked but kept because they had been wedding gifts. I’m not sure why I had never thrown out my childhood jack-in-the box. The music grinder on the side no longer turned and the broken spring had prevented Jack from jumping up for years.
I found a box of letters sent to my mother from my uncle who had served in the Peace Corps in Iran, before the Shah had been deposed. I appreciated them when my mother gave them to me, but now my uncle might like them as a record of his experiences there.
Finally, when the closet was nearly empty, I found what had been my real quarry, the wedding album I had stored away years ago and couldn’t find.
I chewed on a couple of apples while I browsed through the photos which depicted a nearly perfect wedding. Just as we had left the reception, after changing out of our wedding garb, the sunny April day had turned to rain. At the back of the album was a photo of Parker and me, holding our shoes, running barefoot through puddles to our car, laughing in the rain. It was my favorite photo from that day. It reminded me that through even bad times, Parker and I have always been able to laugh.
Speed was not my forté when I sorted through old things. I stopped to look through books and letters. Then I had to decide if each item was destined for the trash or the Goodwill, worth enough to sell online or had enough sentimental value to keep. So my grandiose plan to complete my task in one day was dashed. By the time Parker arrived home from work, the closet contents were scattered throughout the room in piles.
My husband shook his head as he entered the room, knowing it would take days to get the guest room back in order, but he gave me his usual smile.
“Look what I found.” I held up the wedding album. By the time he browsed through it with me, it was nearly eight o'clock and we hadn’t given one thought to dinner.
“Hey, Rosie,” he said. “I’m in the mood for clam chowder. How’s that sound?”
It sounded perfect to me. I took a few minutes to change out of my dusty shirt and apply a dab of lipstick. Then Parker and I walked hand-in-hand to Neptune’s Palace for cold beer and hot soup.
We laughed like hyenas on the way home when my groom and I were soaked by a sudden rainstorm.

You are one great storyteller . I could see her piece by piece taking the things out of the closet. I could feel the joy when she found the album and the ending almost had me crying with joy.
You are a great writer.

'My husband shook his head as he entered the room, knowing it would take days to get the guest room back in order, but he gave me his usual smile.'

were you watching me clean out my storage closet a couple of weeks ago!
In my case It is the living room that still needs to be put back in order. But my husband still gives me his usual smile!

The clean-up seemed like mine. I liked that the wedding album was found and led to a night out.

You humans do save too much. You just have to learn to let things go.
Great story.

Beautiful wonderful story! I love happy relationship stories...ones where each appreciates each other deeply. Well done!

Cool little story!.. I really like the way you made it so personal.. at least that's how it sounded.. Nice one !-) cheers!

I love the way you write and the lovely very real characters you create. Now I have to go check out your give-away. Yippee!

That was a very nice story and I could picture everything happening. It was nice, too, when they recreated at the end what happened at their wedding by laughing in the rain.

It's amazing what a treasure trove can be found when one decides on a 'clearout' isn't it? Loved your story I could 'see' every piece!