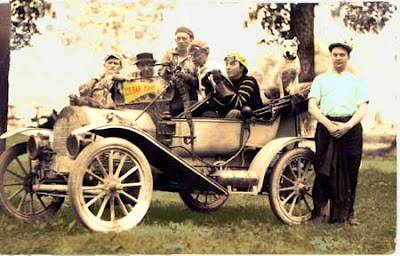 This is a post in response to "A Thousand Word Thursday"
at Cheaper Than Therapy blog.
My grandfather is in the driver's seat in this photo. I have no idea when this was taken. He looks like a teenager, but I understand he always looked young. Maybe someone will recognize the make, model, and year of the car. My father was born in 1909, so I think it might have been within 5 years before or after my father's birth.
I think this was actually a car that was at Cedar Point in Sandusky, Ohio for visitors to sit in while photographs were taken. If so, the men probably traveled from Pittsburgh by train. But it is possible that the car was owned by my grandfather or one of his friends. It looks like my grandfather is having fun, but everyone else looks terribly serious.
And how did the dog get there?
Posted by CJ at 5:26 AM

That's funny how serious they all look. Man, if they're at Cedar Point...I hope they lightened up a bit. Great picture and what a treasure it is for you to have it.

i feel jealous, because i don't have the photos like this..

what a great picture to have! this picture really does speak a 1000 words. great job:)

Heather of the EO said...

This is a terrific photo. I love how there's a bit of color, and all the expressions too.

Oh...I so love that photo! I have a similar photo of my grandmother with her sister and friends in a car that they had the roof cut off of...I'm not sure why I haven't thought of posting it. Happy ATWT!

Fabulous photo, thanks for joining in this week!

I love looking at old photographs. How cool that you have this!

What a cool picture!! I keep telling my grandmother I'm going to start organizing her old photos, I wonder if I'll find anything like this!! Awesome!

wow! what a neat picture and cool car!

Cool window back in time!!! These pictures are so cool because it really makes you wanna know the story behind it!

What a fantastic photograph...I love the gritty feel...

What an AWESOME picture! That is definitely something to cherish!

And don't worry - I'm still laughing hysterically at your shellacking comment on my blog...hold on a sec, I have to wipe the tears...ok, I think I'm done laughing for now...ROTFLMAO!! oops, not quite done! >;o)~ FUNNY!! Thanks for the laugh - and for stopping by my blog! :)