"THE MAKEOVER"  is one of my favorite digital pieces and is also a crowd-pleaser when exhibited.


This post is in response to a prompt at

This post is the second in a series that features the CREATIVE PROCESS for a particular piece of art or a group of works. These posts will explain some or all of the following: how I conceived the idea, how I created the piece, how I decided on the title, and unique parts of the creative process for this particular piece.
Below, you will find the step-by-step process I used to create this image.

The Idea
I found an old reproduction of the Mona Lisa and posted it near my computer where I was working on 50 pieces of digital art for an upcoming solo exhibit. Sometimes when my eyes were tired of the monitor, I would look at Mona wondering if she were considered beautiful in her time. One day, I thought she wouldn't look bad with a bit of makeup, some brighter clothes, and a new hairdo to replace her plastered-down do. Thus the idea to create a makeover was born, along with my apologies to Leonardo.

The Title
"The Makeover" was the obvious title for Mona's drastic remake.
The Time
People often ask how long it takes to create a work of art. The real answer is “all of my life” because creating art requires everything I've learned since I first held a crayon.
“The Makeover” consumed approximately 40 hours. Much of my work isn’t visible because the layering process allowed me to experiment. New elements were added on layers, almost as if they had been painted on transparencies, one on top of another. I was able to add a new layer between layers or delete or change any layer without disturbing the others.
When I scanned the reproduction, the result retained the textured appearance of the original paper and made it look rather old, qualities I didn't expect, but liked. Then I started to work on the 'After' portion of my piece.
I created the initial image in about 25 hours. For several weeks, I returned to it every day, each time finding something to improve. Later, I enlarged it on the monitor to 300% of its actual size to add miniscule details and corrections, one tiny enlarged section at a time.

The Process - The Making of  "THE  MAKEOVER" 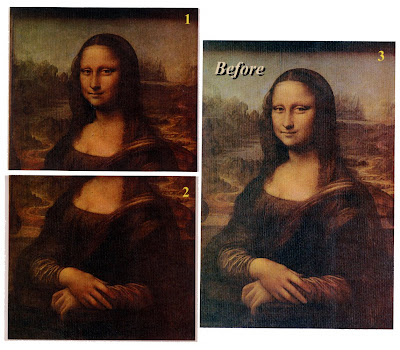 
1. & 2. Because my reproduction of the “Mona Lisa” was so large, I had to scan it in two parts.
3. a. I joined the two scanned pieces together.
b. I touched up the initial image so that the area where the two pieces met was no longer visible.
c. The cream-colored border was eliminated.
d. Colors were adjusted.
e. The entire image was lightened.
f. The “Before” text was added twice, once in yellow and once in black. The two were then overlapped. 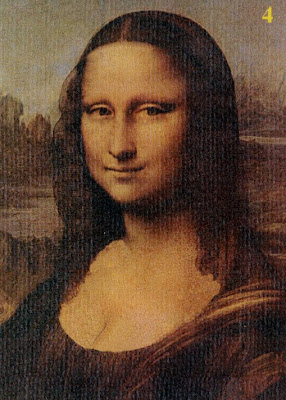 AFTER
4. a. I began the “makeover” portion by touching up facial flaws including adding “concealer” to hide the bags under the eyes.
b. The neckline of the dress was lowered.
c. Skin had to be painted in place of the dress when the neckline changed. 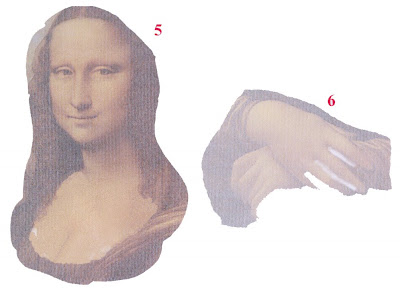 5. Mona’s face and neck were lightened and smoothed and a transparent section of this lightened image was placed over image #4 to create the appearance of foundation makeup.
6. Then, her hands were too dark for her face, so they were lightened similarly. 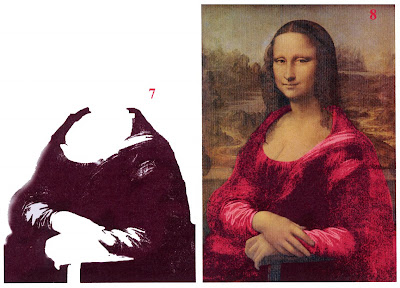 7. The robe was selected, copied and the colors changed. These are the two darkest shades created for the appearance of folds and shadows.
8. a. Lighter shades and highlights of her robe were created.
b. I added a texture to the clothing to make it more like the original reproduction which had been printed on textured paper.
c. Light shadows were added to emphasize her cleavage. Later, shadows were added to this same layer for her new hairdo. 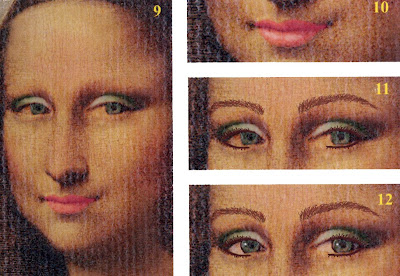 9. a. Mona received a pair of green contact lenses, painted on a transparent layer so that the characteristics of her real eyes would show through.
b. Eye shadow was added on three different layers, then joined and blended.
c. Three different shades of lipstick were applied in transparent layers.
d. I added two shades of blush to her checks, the tips of her nose and chin, her forehead and her neck.
10. To give her lips a fuller appearance, I added highlights to her lower lip.
11. a. Unfortunately for Mona Lisa, the fashion of her day was to shave the eyebrows. I drew on eyebrows, one hair at a time, using several shades of brown.
b. Similarly, she received eyelashes and eyeliner.
12. a. Outlines of the irises were darkened.
b. Whites of the eyes were lightened to eliminate their bloodshot appearance.
c. White dots were added to the eyes for highlights. 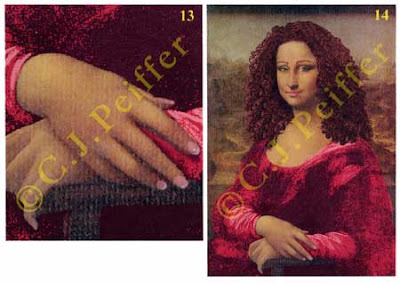 13. I gave Mona a manicure by adding two shades of pink in transparent layers.
14. a. I searched magazines and catalogs, finally settling on several photographs from which I might harvest a hair style.
b. I scanned a catalog image with the new hairdo, then eliminated the face and as much of the background from the catalog image as possible.
c. I overlapped the hair over Mona’s face. It didn’t fit exactly, so I enlarged it, erased what hid her face, and “cloned” the curls to place more curls in areas that needed more hair.
d. Finally, by enlarging the image on the monitor, the background from the catalog image could be eliminated from around and between the curls so that the image of DaVinci’s painted background could show through. 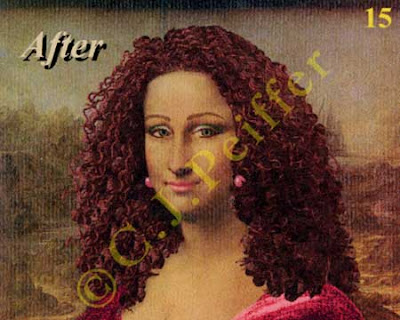 15. a. The hair was highlighted by selecting the lightest strands from image #14, lightening it, making it slightly transparent, then pasting it over the previous image.
b. Earrings were drawn in pink with white highlights.
c. I made final touch-ups on all parts of the image.
d. The “After” text was added in two layers (yellow and black) and overlapped.

Finally the “Before” and “After” images were placed side-by-side. 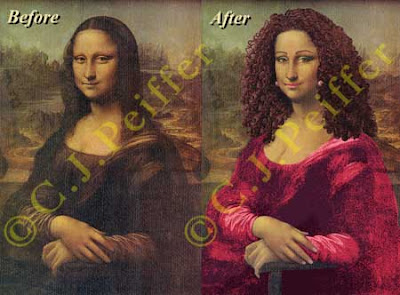 Products featuring "The Makeover" image can be found HERE.
Posted by CJ at 5:06 PM

Wow, C.J., I love this piece and thoroughly enjoyed reading the post outlining your creative process. Thanks for linking to it on The One-Minute Writer!

OH MY GOSH this is totally AWESOME. I would love that print. You did fantastic. WOW just wow