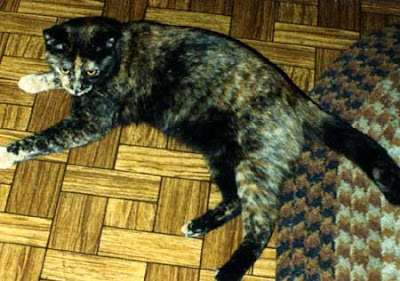 In response the writing prompt on Mama’a Losin’ It blog:
Tell us about a stray animal you took in.
We had moved in June that year. The previous homeowner had a green thumb and a large flower garden. We had moved from a city home with no yard to a small town and a house with a huge yard. So that first summer, while I was on break from teaching, I tried my hand at gardening. It seemed like I spent all of my time pulling weeds.
One day, as I was working near the driveway, a tortoise-shell kitten came from under my car and immediately sauntered up to me to rub her face on my leg. She was petite and had beautiful amber eyes.
As I explained in Cat Tale #1, my husband is a cat magnet, but he was at work in the city during the day. However, when he arrived home, the kitten went right to him.
We already had three cats, so we certainly didn’t want a fourth. We figured she would find her way home, so we didn’t feed her. But every day, there she would be in the yard when I went out to work in the garden. And, of course, being suckers for a furry face, soon we were feeding her ---and then she adopted us. The other cats had all been mine before I had met my husband, so this one became his baby. 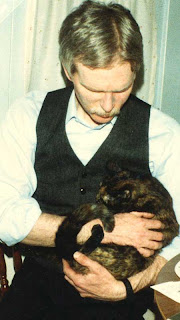 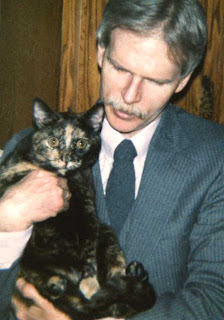 We took her to the vet for a check up and her shots.
Next we had to decide what to name her. I had named the first two cats: Sterling and Stormy. The third cat was offered to me by someone moving to an apartment that wouldn’t accept pets. I had refused until I found out the cat’s name was Stinky ---I figured he’d fit right in.
My husband was interested in antique and classic automobiles, so I asked if there were any car names that started with S-T.  At first he said he didn’t think Studebaker or Stingray would be good names for a cat. After a few more minutes he suggested Stutz Bearcat. So Stutzie became our fourth pet.

One day my husband dropped an ice cube on the kitchen linoleum. Stutzie immediately started to bat it around the floor and chase it like a hockey puck. My husband said, “She misunderstood us. She thought we called it a ‘mice cube.’” Thereafter, we put ‘mice cubes’ on the floor for her nearly every day.
We always kept our cats indoors, but Stutzie would bolt out the back door sometimes when we were entering or exiting the house. She immediately headed for the wild garlic that popped up in our lawn. When we finally caught up to her, my husband would call her ‘Stutzarelli’ because she smelled like a bad Italian restaurant.
She liked bouncing down a few basement steps until she arrived at the one that had a hook with a clothes line attached to it. Then she would try to walk on the clothes line, as if it were a tight rope. Then she became ‘The Amazing Stutzenda.’
One day, we couldn’t find her. We thought she had escaped the house or was hiding in the basement or the attic. After we had given up looking for her, a movement caught my eye. She was on top of the kitchen cabinets looking down at us. I swear she was smirking. I imagine she wondered what the two human idiots were doing, running up and down the stairs looking for her, when she was right there all along. Later we saw how she did it. She hopped to a kitchen chair, then to the table. From there, she floated over to the countertop, then jumped to the microwave on top of a high rolling cart, and finally leaped to the top of the cabinets. 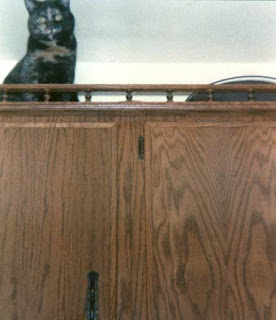 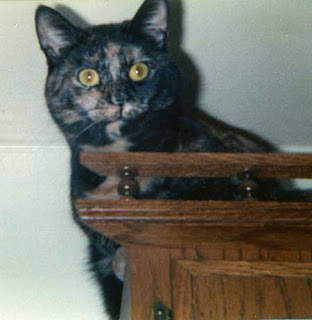 Meanwhile, our oldest cat, Sterling, developed kidney problems. He was the first pet that had been my very own, before I met my husband, so he held a special place in my heart. I cried for days after he died.

About two years later, when Stutzie was about 4, she started to limp. When we took her to the vet, he determined she had a tumor in her left rear leg, and after a biopsy, discovered it was malignant. He said that instead of removing the tumor and Stutzie having a useless leg, most cats got along quite well on three legs, so he suggested he amputate it. Reluctantly, we agreed.
Before our vet proceeded with the surgery, he decided to perform one more test. Sadly, Stutzie had feline leukemia. He said she probably already had it when she was a kitten. At that point, he decided not to do the surgery.
We took our baby home with instructions to bring her back if she stopped eating or seemed to be in pain. Although we had a strict rule in the house, that the cats were not allowed in the bedroom, we placed an extra litter box, food and water in the room and Stutzie shared our bed with us. Within days, she stopped eating, but she still cuddled up to us and purred loudly, lulling us to sleep.
After a few days, she became weak and listless and still wouldn't eat. We decided to end her suffering.
I thought I’d never love a cat as much as I loved Sterling, but Stutzie was so young that it was even sadder to lose her. She had been smart and funny. She amazed us with her antics and always made us laugh. She had given us four years of love and joy.
I hope we returned the favor.

A dearly loved pet is always hard to see go. I think that the decision to finally end the suffering is so hard even if you know it is right.

Here's to the memory of Stutzie!

{Came over from Mama Kat's Workshop) :)

Stutzie was such a cute cat (I have a soft spot particularly for tortoise-shell kitties) and such a great character too!

I particularly love the parts of this story where you label her with variations of her name. :)

I think you definitely returned the favor!

I love the term "mice cubes"!

I'm sure Stutzie loved you just as mich as you loved her. She couldn't ask for better parents.

I didn't write in my post, but three of our cats are already in Heaven. Ever since, I've blocked all my emotion when it comes to cat. Their deaths totally changed the way I feel about having animals as a pet. I love cats, but I just can't get through myself to say "yes" to my little ones' request to get a kitten.

I just don't want to go through the same pain when I lost those cats...

I'm sure Stutzie is watching over you!!

Awwwww...:( So sad. I have a soft spot for cats too and she sounds like a sweetheart. So how many cats do you have now??

Mama Kat
We have had, over the years, 8 cats. At any one time, four was the max. But now we have only Lunette who I wrote about a few weeks ago for another of your prompts.