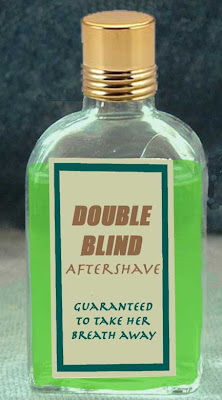 In response to a writing prompt on Mama’s Losin’ It:
Tell us about a memorable blind date.
More than 25 years ago, between husband #1 and husband #2, the only men I met were those with whom I worked and they were either married or the kind of men I liked as friends, but with whom I wouldn’t want a romantic involvement.
So I joined a dating service. Nothing clicked with the first few guys I met, but I am an optimist, so I was ready to meet the next new man who contacted me.
A guy called me and we had some of the same interests ---although he strangely expressed no interest that I was an artist. We decided to meet. I can’t remember the man’s name now, so I’ll call him Ryan.

Ryan suggested that we attend a Clancy Brothers concert. He seemed to be a fan, but I knew little about them. However, I was friends with members of a group of singers from Northern Ireland, one of whom was a song writer who knew the Clancy Brothers, so I thought at least I would have something to contribute to our conversation.
Before we ended our call, Ryan said he needed to tell me something important, in case it would bother me. Ah, oh! I thought. This sounded bad. Maybe he was going to tell me he was married or had recently been released from jail. 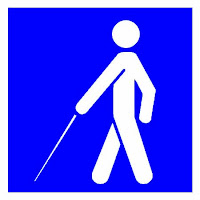 But it was nothing like that. With a nervous laugh he explained that this would be a blind, blind date. I told him I understood that it was a blind date. But he continued by explaining it would be a true blind date since he had lost his sight to detached retinas when he was a child.
I had a few blind acquaintances, so that didn’t put me off at all. At least, I thought, it wouldn’t matter that I was no beauty queen and I wouldn’t have to stress over what to wear. I thought about offering to pick him up since it might be difficult for him to get around, but I was a little leary of anyone I met via a dating service, so we chose a time and place to meet near the theater.

In the coffee shop, I recognized him by his white cane. Very polite, he stood when I approached and held out his hand to shake. I sat across from Ryan and we ordered coffee. He was a little heavy set and ordinary looking, except that he kept his eyes closed, but was dressed nicely and had a winning smile. I quickly realized he had a dark sense of humor, especially about his blindness.
After we ordered coffee, I got a whiff of Ryan's cologne. The scent was fine, but it smelled like he had poured an entire bottle over himself. I’m not exactly allergic to perfumes or colognes, but there are some that make me feel like my throat is closing up and I can’t breathe. Some make me feel sick to my stomach. His did both.
I didn’t want to insult the man on our first date, so I said nothing. I pushed my chair as far from the table as I could. Luckily he couldn't see me turning my head to the side while holding my hand in front of my nose, trying to suck in air from behind me rather than in front of me. Once the coffee arrived, I pretty much kept my nose in my mug, because the scent of coffee masked Ryan’s aftershave. 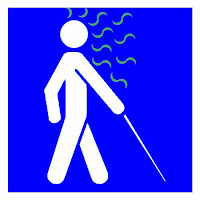 About thirty minutes before the concert was to begin, we set off for the theater. I knew from past experience, not to grab his arm, but asked Ryan if he wanted to hold onto mine. When he held my arm, we were closer than in the coffee shop, but at least outside there was a breeze and fresh air as we walked to the theater.
In the lobby, I excused myself to go the the ladies’ room and stayed longer than I normally would, frequently checking my watch to give myself enough time to get to our seats before the performance started.
Once the concert began, I turned as far sideways in my seat as I could, facing away from Ryan. Luckily he didn’t choose to put his arm around my shoulder or he would have realized I was facing away from him. If he noticed, I planned to make up an excuse about a sore hip and that I was more comfortable in a sideways position.
Luckily Ryan wasn’t the chatty type during the concert, so I didn’t have to turn toward him so he wouldn’t realize from the projection of my voice that I was facing away from him every time I spoke.
During the intermission, I again spent time in the restroom and somehow got through the rest of the performance without passing out or throwing up. Ryan seemed harmless, so I offered to drive him home.
Because it was a warm night, we were able to keep the windows open while I drove. In an enclosed vehicle, I would surely have been sick. I didn’t get out of the car with Ryan, but we parted at the curb in front of his apartment, agreeing that we would talk again.
On the way home, I tried to decide if I should explain my problem with aftershave and agree to go out with Ryan again or come up with an excuse to let him down politely. He was nice enough, but nothing had clicked between us ---but maybe it was just the awful cologne that put me off, not him.
But, he never called. He hadn’t seen the pained expression on my face for the entire evening, but he may have noticed it in my voice or sensed a reluctance on my part. Maybe he met a woman who adored his cologne or maybe he just didn’t like me. I knew one thing for sure. It wasn’t my lack of knock-out good looks that kept him away.
(©2009, C.J. Peiffer)

I found you from the mr. linky at the writers workshop. Your situation was a tough one. I think I might have said I was allergic to the scent.

Or perhaps it was his ability to sense the environment and your reactions? I had a blind friend in college that could tell who was sitting where in a room simply by their characteristic motions (and the subsequent noises).

P.S. C.J. I meant to mention I like your profile cow picture! You'll note that the banner of my blog has a Picasso bull in it.

a blind blind date. WOW!
you know, the funny thing about this story is that for those who have one sense that is compromised, the others tend to grow stronger. I wonder if he could scent his scent himself... :-)
Thanks for the linky Hello!!
Blessings!

Wow, a blind blind date. That has to be a first! Something tells me that if there had been sparks, you wouldn't have cared as much about the cologne, so he clearly wasn't the man for you.
Great story and great blog! Thanks for visiting mine, too! :)