WHY DO I STUDY MARK TWAIN? 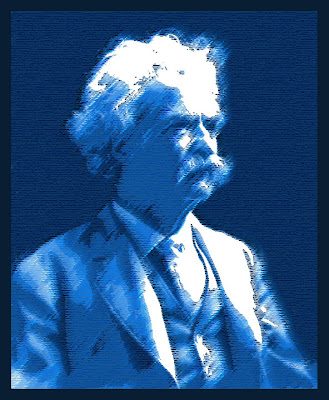 In my post MEETING MARK TWAIN about the 2009 Elmira Mark Twain Conference, I included a link to a video made by John Bird, a conference participant. Bird asked fellow Twain scholars, "Why do you work on Mark Twain?" or "Why do you study Mark Twain?"
The answers were varied. Bird could not possibly ask every participant because the video would have been hours long. I'm not sure what I would have said on the spur of the moment, but this is how I would answer after having time to think about the question:
I read several of Twain's novels in my teens, Tom Sawyer, Huck Finn, the Prince and the Pauper, A Connecticut Yankee. I enjoyed the novels, but I wasn't yet a Twain enthusiast.
In college, I read some of Twain's social commentary, and that is when I fell in love with Mark Twain. I also read some of his writings that he directed not be published until 100 years after his death. He said that only dead men can tell the truth. Clara, the only daughter who survived him, decided to publish Letters from the Earth and other controversial writings in 1960, fifty years after her father's death.
Fellow Twain aficionado Richard Talbot put into words my exact sentiments: Twain "was singing a song that was already in my heart... I just wanted to hum along."
Twain once said, "Humor must not professedly teach and it must not professedly preach, but it must do both if it would live forever." He was able to cut through the rhetoric to tell the truth about war, race, imperialism, religion, government, and many other subjects. His thoughts have such a universal quality that they are as relevant today as they were when he wrote them.
Years ago, when I first read Twain's social commentaries, I was amazed that someone who died in 1910 could express exactly what was in my heart so eloquently and with such good humor.
His humor is what makes Twain so very enjoyable. In Following the Equator, he said, “Everything human is pathetic. The secret source of Humor itself is not joy but sorrow. There is no humor in heaven.” In The Mysterious Stranger, he wrote: “Against the assault of laughter nothing can stand.”
* * * * *
What makes Twain so fascinating is that a multitude of Twain's private papers, notebooks, writings, photographs, business documents, and letters had not been published until the later part of the 20th century. Most papers were donated by his daughter to the Bancroft Library at the University of California at Berkeley, which now houses the Mark Twain Papers and Project which publishes the papers (many online) and encourages Twain research. Previously-unknown letters and other writing surface occasionally. Thus, we are still learning from this complex man who was dead serious and hilariously funny, whose life was filled with both sorrow and joy, who came from the humblest of beginnings, became wealthy, went broke, ended up a wealthy man again, and became a world-renowned super star.
Twain could have been talking about himself when he said, "There was never yet an uninteresting life. Such a thing is an impossibility. Inside the dullest exterior there is a drama, a comedy, and a tragedy."

Twain was such an intensely passionate and compassionate soul and so complex. I think his works carry the power of love. His anger was always tinged with humor and passion. Wish he was alive today. He could surely lift the current "discourse."