BEWARE OF THE BLOB!

A few weeks ago my husband and I were working in our vegetable garden when our neighbor urgently called us over to the edge of our yard. She was concerned because in the mulch between some evergreens we had recently planted, there was a large, slimey, bright-yellow mass on the mulch.
“What is that?” she asked.
We had no idea, but I said it looked like an animal might have thrown up there. But on further inspection, I decided the color and texture were too uniform and the yellow too bright.

My husband kept an eye on it. The next day it turned a peachy color and later changed into a brown dust.
When we did a search on the internet, we learned it is a mold called Fuligo septica, but because of it’s appearance, it is commonly called “dog vomit slime mold.” Nice name, huh?
Anyway, it is harmless. In fact, some related molds in Mexico are gathered, cooked, and eaten much like scrambled eggs. It usually develops on mulch or on rotting materials such as dead trees or fallen leaves. And it almost always develops after a period of unusually wet weather. 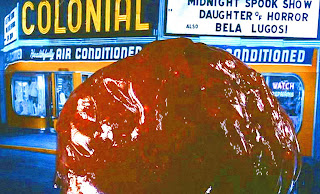 The other interesting thing about this slime mold is that it inspired the 1958 film “The Blob!” starring Steve McQueen. So, of course, we ordered “The Blob!” from Netflix. I had never seen the entire film before, just the highlights, including the famous scene of a crowd frantically running from the Colonial Theater. For a low-budget, sci-fi B-movie, it wasn’t bad.
"The Blob!" in the film was an amoeba-like creature that arrived from outerspace and spent the rest of the film devouring people. It was immune from gunfire and high-voltage electricity.

Beware of The Blob!

Beware of The Blob!
It creeps, and leaps, and glides and slides,
Across the floor, right through the door
And all around the wall.
A splotch, a blotch,
Be careful of The Blob!

Although credited to The Five Blobs, the song was performed by Bernie Nee and overdubbed to make him sound like a group. It was written to a Latin beat by the songwriting duo of Burt Bacharach and Mack David.

The song was released as a single in 1958 and, ridiculous and annoying as it was, it became a top-40 hit nationwide, making it one of Bacharach's earliest hits. 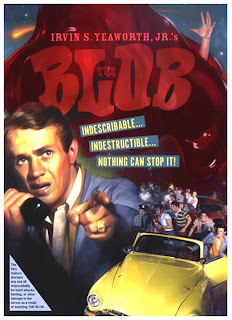 Steve McQueen was offered $2,500 or 10% of the profits. He took the $2,500 because he didn't expect the film to be a box-office success. It grossed over 4 million dollars.

The producers originally signed Steve McQueen to a three-film deal. McQueen was so difficult to work with during filming that he was released from his contract for the other two films. (My husband, a film buff, has read accounts of Steve’s constant whining on other film projects.)

In "The Blob!" the movie being shown at the Colonial Theatre was “Daughter of Horror,” originally released as “Dementia .” The movie was silent, so Ed McMahon was added as a narrator wearing a stocking over his head and walking through a cemetery as he spoke. Johnny Carson surprised McMahon on “The Tonight Show” one night with a clip from the edited film.

Most of the movie was filmed in Phoenixville, PA. The crew had worked on only educational films previously.

The Blob itself was created with a modified weather balloon in the early shots and, in the later shots, with colored silicone gel which was actually fairly firm. The crew used hot lights to make it more pliable.

Even though real slime mold (from which The Blob was inspired) starts out as bright yellow, in the film The Blob was a clear gel-like substance until it started to consume people, afterwhich it turned red. 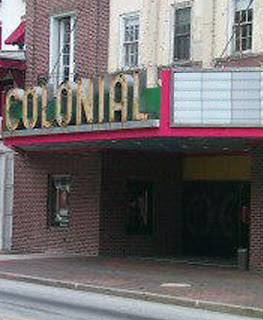 In Phoenixville, the Colonial Theater still exists and hosts an annual Blobfest every July including a reenactment of the crowd exiting the theater.

-----
One additional note: I don't want to give away the end for those who have not seen the film, but because of certain environmental conditions in the world today, The Blob! just might be a threat again. So, BEWARE!

This is really interesting!
A bit disgusting at firt (I must admit)
Yes, we learn somthing new everyday