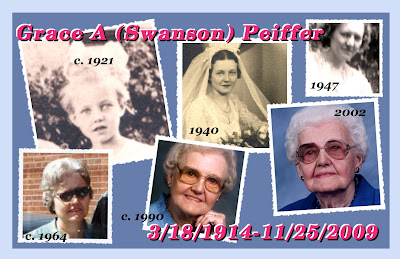 My 95 year old mother had been on a waiting list for an assisted living facility for over 14 months. Meanwhile she had in-home help when I couldn't be there.
Her health and dementia had slowly worsened over the past five years, but she seemed to go down hill very swiftly in the last two months. Still, she could dress and feed herself. She took her medications, but someone had to place the correct pills in her daily pill organizer so she would take the right ones. Physically, she was frail, but had very little wrong with her.
Recently, she fell in her home between her day-time and night-time help. We thought she had a stroke because she was not walking and had no recollection of her fall. We took her to the emergency room where it was determined that she did not have a stroke. Although she had only minor physical injuries, they decided to keep her for observation. She was disorientated and very listless, and somewhat dehydrated. She knew she was in the hospital, but did not understand why.
Several days later, she seemed to be doing fairly well ---she was walking short distances with help, feeding herself and alert, although somewhat disoriented. However, her doctor recommended we place her in a nursing home for a month or so after leaving the hospital and we were looking into that.
However, during the early hours of November 25th, the day before Thanksgiving, she died peacefully in her sleep.
My Aunt Jeanne, my mother's youngest sister, died the day before Thanksgiving in 2006. Their grandfather died the day before Thanksgiving in 1946. If I were a superstitious person, I might worry every time that holiday rolled around.
I've been out of touch because of my mother's deteriorating condition, visiting the hospital and taking care of her home and finances. Since her death I have been contacting everyone, arranging a memorial service, taking care of matters (bills, insurance, the will, etc.) helping my niece move into my mother's home, disposing of my mothers' belongings, and dealing with lawyers and probate.
My mother left written instructions that she wanted to be cremated with no viewing, which suited me fine. I have never liked funeral homes and avoid them whenever possible. She requested only a memorial service. Since there was to be no viewing, there was no rush to hold the service. I didn't want to do it over Thanksgiving weekend. The next week, the church was busy with a large meeting and several weddings. Also a good friend of my mother's was having a 100th birthday party that week and I didn't want to put a damper on that, so we scheduled the service for two weeks after her death.
My mother was not well-educated, but she was very smart and well-read. She had many talents. Despite her many excellent qualities, she was not perfect. She had a great sense of humor but also had a dark side that few people saw. Yet, she was a caring person who was involved in a lot of volunteer work. Although she was progressive for her time, she was also a product of her era.
In my next post, I will include a copy of the program from my mother's memorial service and tell you a little about her life.
I previously wrote that I probably would not be blogging after my mother's death until January, but I've been thinking about my mother, so I will probably write some things about my mother and our family. After long months of my mother's decline, I am inspired to affirm life with some creative art and writing, too.

Carolina, am sorry for your loss. 95 years, isn't that wonderful. My friend Louisa who died in August was 87, and also seemed to go quickly - over a 2 months period of time. There are such questions in my mind - one is why we strive to live longer years when our mind, our bodies, and more our spirit can't seem to keep going that long.... I grieve for you.
Hugs

God bless you and your mother's soul.

I feel the same way as you and your mother about funerals and viewings and such. I loathe people staring at me while I'm alive; why would I want it while I'm dead and can do nothing about it?

Take care of yourself during your Blogging Hiatus. I hope you have time to get everything in order and feel some sense of completeness and satisfaction.

I'm sorry for your loss but I'm glad that your mother left you with directions about what to do -- it helps so much. I found it very helpful to write about my dad after he died and I hope you get the same sense of peace as you work through your loss.