In February of 1989, the school district where I taught selected me to attend a workshop for William Glasser’s Reality Therapy or what we called Responsibility Training, the new discipline program the school would be enacting district-wide the following school year.
Charlie who was also selected to attend, picked me up at the junior high and we drove to the airport. I knew who Charlie was, but since he taught in an elementary building, I didn’t know him well. He confessed on the way that he was not fond of flying.
We were seated in the plane waiting for takeoff when the man in front of us lifted his newspaper. The headline was about an airplane flying from Hawaii in which a door flew open in flight and several passengers had been ejected from the plane and lost at sea. Charlie was not happy. However, I convinced him of the unlikelihood of two plane disasters in one day. With white knuckles he gripped the arms of his seat as we took off.
A van picked us up at at the airport in Cincinnati to take us to the small college where the workshop was being held. I expected all of the participants to be teachers, but most worked in other fields such as psychology, drug rehabilitation, counseling, or law enforcement.
Apparently our school district had enrolled us late. There were no rooms for us at the college, so we were told that another woman and I would share a room in a motel in Covington, KY, just across the river, and Charlie would have his own room there. While we waited for my roommate in a reception area of the college, a drama was playing out elsewhere.
A workshop participant named Tanya showed up at the registration desk, signed in and was given a key and directions to a dorm room. Tanya used the key to open the door to the room. Already situated were three middle-aged women in the four-bed room. They looked up in shock to see Tanya. One woman gasped, but recovered and politely inquired what Tanya was doing there.
“Uh, I think we have a problem. I’m supposed to be your roommate.”
Tanya backed out of the room and returned to the registration desk to explain that there had been an error in the room assignments.

In the photograph below, you will see why Tanya’s “roommates” were a little shocked.
SCROLL TO THE BOTTOM OF THIS POST TO SEE THE PHOTO
Tanya was paired with Charlie to share his room at the motel. Just to make things more confusing, my roommate was a female named Danni.
Over the next few days, we got to know each other. Danni was a parole officer. Charlie’s wife was eight months pregnant with their first child, so he was on the phone with her five or six times a day to make sure she was doing okay.
Tanya worked at a juvenile detention center. At the college cafeteria, he filled two plates of food and four or five glasses of milk for each meal, and told us all his siblings were about his size including his sisters who were over six feet tall. It was no surprise to learn he had been a defensive end at Michigan State and had been drafted by the New Orleans Saints in 1980.
Despite his intimidating appearance, Tanya was a gentle man with a great sense of humor. During one of the workshop exercises, he had tears in his eyes when he spoke if his grandmother. When he told us the story of this room assignment mix-up ---or perhaps his mistaken "sexual identity" ---he had us in stitches.
I had to have a photo of the four of us together. Every time I told this story, I would display the photo at just the right moment.
My principal thought Tanya might be a good person to hire as a one-man discipline machine for our entire school system. 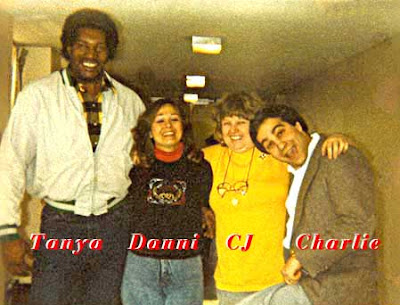 This is an awesome post! I love the way this story unfolded :)

That was so funny! I'm sure everyone had a little bit of a shock when Tanya walked in! Looks like you guys just had a ton of fun -- it shows in the photo!

And thanks for your comment on my author interview. I'm so nervous that he will come and visit and there will be no comment or anything so you made my day!

Hi -- I'm back again. Wanted to tell you that I gave you an award here: